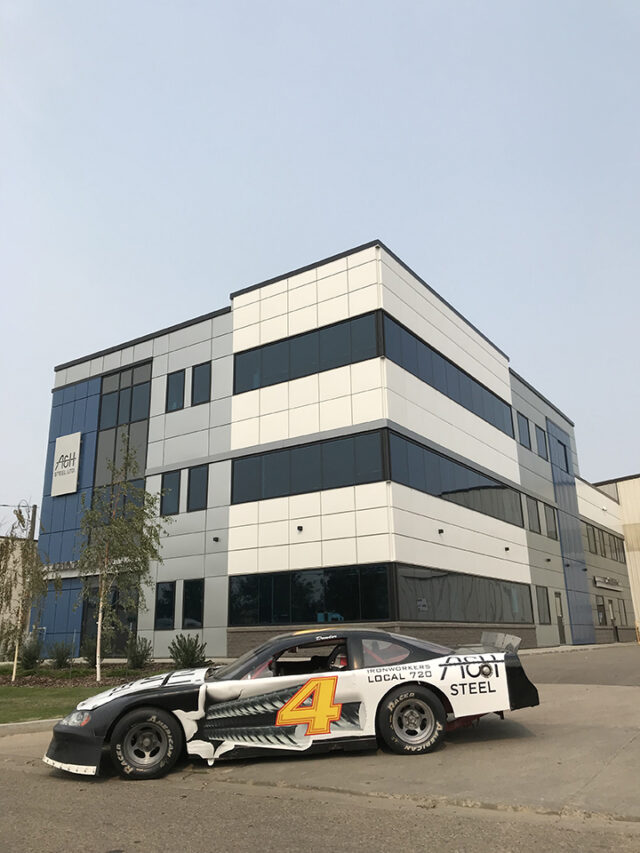 A&H Steel specializes in the supply, fabrication and installation of reinforcing steel, also known as rebar. What started out in 1970 with 12 employees is now a company over 200 strong during peak season. A&H Steel is affiliated with Iron Workers Union Local 720. Principals Glenise Harvey and Craig Kotun also own a reinforcing steel detailing company in Vancouver (Phoenix Rebar Consultants) and have a 50 per cent ownership in A&H Vancouver, a company that opened in March 2020.

This year, A&H Steel is celebrating its 50th anniversary. It all started with two brothers, Andy and Hank Kotun.

Glenise explains, “A year after starting out, Hank moved on to start his own rebar company, leaving Andy with A&H. My mother, Olga Chebuk, was working as a reinforcing steel detailer at the time and he invited her to become a partner with him. My mom was probably the only woman doing that job in Edmonton, possibly in Western Canada at that time. Andy and Olga remained the owners until 2006 at which time they transferred ownership to their children, which is how Craig and I became 50/50 owners.”

She continues with the history of the company, saying, “In our humble beginnings the company had four people working in the office, four people working on a shear and a bender, and about 15 to 20 men in the field. Andy was a hardworking man who did everything from the estimating, detailing, fabricating and placing. My mom, as I mentioned, was a detailer. A detailer is a specialized draftsman who works off the drawings of engineers to produce shop drawings for the men to fabricate the correct lengths and bends of the bars and places drawings for the crews to place the bars appropriately on site. Together, Andy and Olga made an incredible team.”

Some of the many projects A&H Steel has been involved with over the years include a large number of heavy industrial projects for Syncrude and Suncor, projects in the Fort McMurray region, 8th Avenue Place, Bow Valley College and Eau Claire Tower in Calgary, Rogers Place, the Edmonton Tower, LRT North, and LRT Valley Line.

“We recently completed the LNG Cedar Valley Lodge in Kitimat and we are currently involved in other projects there,” Glenise adds. “A&H Vancouver is currently involved in supplying the rebar for a number of significant projects in the lower mainland, including 400 West Georgia, The Butterfly (this will be the tallest building in downtown Vancouver when it will be completed), and Riverbend (a warehouse facility the size of six footballs fields).”

Craig fondly remembers two projects that help define the company, saying, “Eight Avenue Place in Calgary was our first high rise. It also was our first raft slab, which happened to be one of the largest in Western Canada at that time. Rogers Place arena… that was a difficult job with an accelerated schedule. We not only met the schedule, but also kept the project within budget.”

Glenise attributes half a century of success to the hardworking men and women that have enjoyed long-term careers with A&H Steel.

“People are always a company’s greatest asset. Our parents laid the foundation of treating their employees well and taking care of them because they knew with those people working side by side with them, they could keep the business viable and provide others with a livelihood. Over 50 years, A&H Steel has had the privilege of employing many amazing, hard working, dedicated people. If it wasn’t for everyone over these years, we would not still be here and going strong.”

She and Craig take their responsibility to the team and to their clients very seriously. “First and foremost,” notes Glenise, “is being able to provide numerous people with a workplace that honours them and whose primary purpose is to elevate them. Knowing that we are responsible for providing so many people with a livelihood is never lost on us and we want to constantly and consistently do our best for them. Second, is the joy of being a part of building communities.”

Glenise continues, “Most people don’t know how very driven we are by our five values:

“We have spent a significant amount of time and funds training, developing and operationalizing these values with our people. At A&H they are not words on a wall or the website. They are laws of performance!”

It’s not just the team and clients A&H Steel is passionate about. Their commitment encompasses the community as well. For the last three years the company has supported United Way. Recently, A&H has also adopted a school.

“Our first project was to buy the school recess equipment,” says Glenise. “Due to COVID they are limited to the amount of time they get on the playground equipment. We want to make this a very personal experience for the students as well as the teachers and our people.”

As with many businesses in Alberta, A&H Steel is challenged by the repercussions of the pandemic and the state of Alberta’s economy, but Glenise and Craig have plenty of room and reason for optimism.

“We are very excited about our expansion into Vancouver,” Glenise smiles. “This only just happened in March of 2020, so we are still very focused on nurturing it into the kind of success we have experienced here. We have partnered with some phenomenal formwork companies, Whitewater Concrete and Syber Concrete, to reinvent the industry in the Lower Mainland.”

On behalf of management and the team, Glenise thanks A&H Steel’s founders; past and present staff; Nestor Puchalski and Marvin Olansky, who, among others, had a profound impact on the company; vendors; suppliers; and of course – satisfied customers across Western Canada.

Glenise concludes, “A&H Steel is committed to getting rebar out the door and in place for our customers. Their happiness matters.”

For A&H Steel, 50 years is just the beginning of even more wonderful things to come.