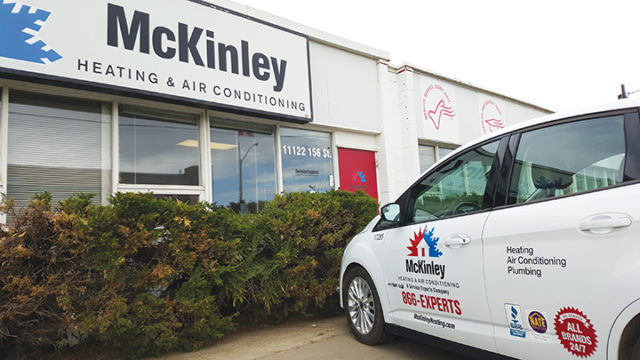 The old saying is true. Not all heroes wear capes. Sometimes they wear coveralls. When the temperature drops below -25◦C, the furnace is out, and a pipe bursts in your wall, Iron Man isn’t going to save you. McKinley is.

McKinley Heating, Air Conditioning & Plumbing, a Service Experts Company, can’t say no to a service call, and not just because that’s a company rule (it’s not), they just don’t want to. They don’t want you to be cold, uncomfortable, suffering from no hot water, breathing improperly filtered air, or roasting in your home with a broken air conditioner. Even when the phone rings off the hook with frantic calls for service when the weather turns, they don’t say “we’re too busy,” they say “yes” and they dash off to save the day. The company ownership group, management team, staff, installers, service technicians, residential sales consultants and the administrative assistants all feel the same sense of urgency to give the city the McKinley experience it deserves.

To understand why the McKinley team cares about you so much, we have to go back in time to the late 1940s.

World War II is over. Like many men his age, Tom McKinley is looking to make his way in a post-war world. There’s not a lot of work out there, so he does the next best thing: he starts his own business selling sheet metal. Every day he takes his phone and stretches the cord clean across from his house to the nice lady’s window next door, who answers the phone as his receptionist. Conducting business from his garage, Tom McKinley was innovative and persistent from the very start.

The company grew and branched out into other ventures, include servicing. In the late 60s, the company is divided and sold. The sheet metal division sold to a gentleman named Marco and the service division sold to Roly Baron, father of current general manager Brian Baron. Brian would join the company in 1973.

“We were a Lennox dealer at that time,” reminisces Brian. “Then Lennox started a Planned Service (PS) dealership and we became the first PS dealership in Western Canada. With that, we started doing more commercial work, including mines, industrial plants, institutions, and malls. It wasn’t until the 80s that we started to do more residential work.”

“During the early days, Henry van Ziegler, the head of Lilydale, was instrumental in helping my father get a lot of contract work,” continues Brian. “For years, we serviced all the Lilydale poultry barns in Edmonton. I remember cleaning the burners in the chicken barns. It was not a clean or pleasant job and I would stink like a chicken! But that contract meant we were able to keep people working and grow the company. It also grew our work ethic. If their HVAC systems went down, it would have affected 30,000 chickens and turkeys.”

When his father entered semi retirement, Brian and his brother purchased the company and expanded its residential division. Then along came 2001 and everything changed.

“Deregulation of the energy market,” smiles Brian. “Before then, gas companies could not sell furnaces. Suddenly, larger companies were buying up smaller high-end companies so they could expand their market share. Lennox decided to purchase a set amount of companies in each province. Within two months, they bought 62 private dealerships and formed Service Experts.”

McKinley would be owned under this banner for the next 10 years, until Lennox expanded again to become North American Service Experts to accommodate both the Canadian and American markets.

No stranger to change, McKinley continues to roll with the times. “The biggest change in the last year is the switch from conventional hot water tanks to high efficiency instant tanks,” confirms Brian. “And now, more people are renting our equipment and having us own and maintain it instead of owning it themselves.”

No matter how many times the company evolves, whether it’s a garage and a landline with a cord through a neighbour’s window or part of a thriving multi-national firm, the McKinley way holds fast to one important principle: do the job right, and if you don’t, keep at it until you make it right. Baron says, “If something goes wrong, if something is not right, I will personally do my best to make sure that, in the end, it is correct. We don’t walk away from pain. Our outstanding consumer reviews and many industry awards reflect the level of service we provide.”

Like founder Tom McKinley, Brian continues to approach the business with an entrepreneurial mindset.

“When you are an entrepreneur, it’s 24/7, because the company is always on your mind. Employees can go home and not think about work until the next morning. Being an entrepreneur means sacrifice, but it’s sacrifice that makes the world a better, or more comfortable, place. It also means being a leader and developing trust among the team. It’s being open to new ideas and learning that your ideas and thoughts are only 40 per cent correct. When I was younger, I thought it was closer to 90 per cent!” Brian laughs. “I use the jet fighter analogy. A young hot shot thinks they are immortal. As they get older, they understand they can get shot down and they start to approach life with more knowledge, patience, and understanding. Right now, I feel like an ‘old pilot’.”

He and the team also enjoy supporting the community in charitable ways. Brian explains, “For a long time we focused on giving back to smaller initiatives throughout the year. Now, we have made a long-term commitment through Service Experts to the Make-A-Wish® Foundation. We look forward to making individual moments in time even more special.”

This year marks an important milestone for the company; 1968 was when Baron Sr. bought McKinley. With 50 years on the clock, the company is evolving under its recent acquisition by a 100 per cent Canadian-owned corporation that has a drive to increase HVAC services across North America. Growth is on the horizon – again. But, as Brian points out, the size and success of the company is not what drives them. The focus will continue to be on each individual customer, and on giving those customers the service they deserve.

Brian, the management team, and the ownership group say a very big thank you to founder Tom McKinley and his tenacity in launching a company during those lean post-war years, to Henry van Ziegler and the other company owners that provided steady work for the McKinley team during the company’s early days, to Baron Sr. and the family members that bought and grew the company, to the hardworking staff, and most of all, to the customers the team loves to get up and work with every day.

“This trade is not glamorous,” concludes Brian as he and his team suit up in their capes – ah… workwear – for yet another day of furnaces, filters, hot water tanks, and pipes. The smiles on their faces betray that glamour is not what drives them, it’s customer service, and at that they always excel. 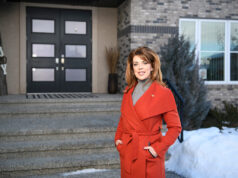 Building Up, Branching Out