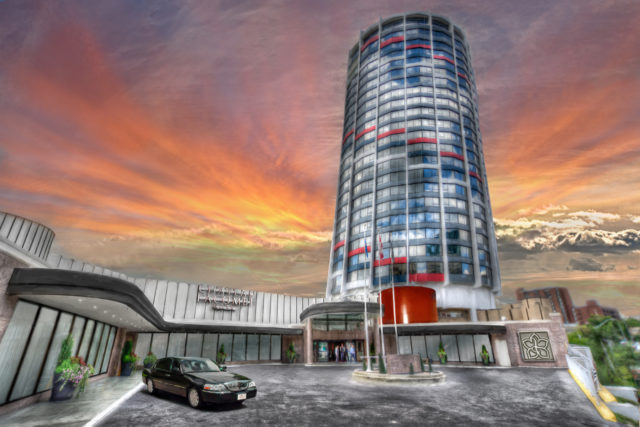 Named for Father Lacombe, who was instrumental in Alberta’s growth and development, the towering hotel was built to rival competitor Hotel MacDonald – which is ironic since the hotel’s unique look was designed by architect John MacDonald.

It wasn’t easy getting the project off the ground. It was unclear if a 1933 law that set aside riverbank land as a park would be crossed, but it turned out that the grounds for the Chateau were not part of the riverbank. The Edmonton Journal cautioned in a 1963 editorial that the site was “one of the last open viewpoints in the whole of the downtown area,” and J.E. Dodds, the then secretary of the McDougall United church board, wrote a scathing letter to city council in which he cited, “Should a high-rise building…be located in the area, a grave injustice to the people of Edmonton would ensue.”

Though some Edmontonians were for the project and some were against it, the majority prevailed. Construction started in 1964 with an estimated two-year completion date and a budget of $9 million. The hotel opened, to great fanfare, on December 28, 1966 as part of the Canadian Pacific Hotels group.

“In its heyday, we were the most modern property in town, built in the grand hotel style with an impressive lobby and larger rooms, and we still have the best views,” says Chateau Lacombe’s general manager, Ike Janacek, whose long career in hotel management makes him the perfect candidate to usher the hotel towards to its centennial. “The original plans called for a second tower, but that didn’t wind up happening. When a private owner bought the hotel five years ago, he planned to build that second tower, but the footings wouldn’t support it without major upgrades. Unfortunately, the hotel went into receivership. In 2013, the property was purchased by Nova Hotels, an Alberta-based and owned company whose portfolio includes 14 other hotels in Alberta, the Yukon and Saskatchewan. The new owners were quick to start restoring the Chateau to its former glory.”

Chateau Lacombe has 24 floors, 307 rooms and suites, the second largest column free hotel grand ballroom in downtown, and is topped by one of Edmonton’s most beloved restaurants, the revolving La Ronde.

“La Ronde is the only rooftop rotating restaurant in the city. It takes 88 minutes for the restaurant to go around once. On a clear day, you can see the West Edmonton Mall to the west, almost to the airport to the south, and at night, the lights to the east look like Gotham City! To the north, of course, is downtown, Rogers Place and the surrounding Ice District”.

The history and look of the hotel are huge draws, but it’s the service guests receive that truly sets the Chateau apart. “Our motto is be friendly, not familiar, and create memorable moments for our guests,” says Janacek. “People are people, not a room number. We smile, make eye contact and ask our guests how they are. Happily, the feedback we get from our clientele is ‘the staff, and the service, was wonderful.’ I give our staff a lot of credit. They are the most important asset of the hotel. They are the people who deliver the service and make sure the rooms are comfortable and clean. It’s very much appreciated by our guests, myself and the ownership.”

The staff enjoy their jobs, which results in very low turnover. In fact, one recent retiree had worked at Chateau Lacombe for 47 years. A large portion of the team have 20+ years of service. As Janacek is happy to admit, “It’s fun to work here.”

To date, more than 60 rooms have been completely renovated along with the iconic Bellamy’s Lounge and Café Lacombe on the Hotel’s main floor. The distinctive exterior of the property is also being freshened up with more modern panels and energy efficient windows. However, the old charm and appeal of the hotel is retained. Wood paneling, gold elevator doors, lavish crown moulding and impressive chandeliers – all the things that make the Chateau special – are still there.

“Within the next five years, we will have the rest of the hotel renovated. Then we’ll do it again!” says Janacek. “It’s important to keep up with the latest upgrades and conveniences for our guests.”

The grand hotel is not just focused inward. The name Chateau Lacombe is, in its quiet and stately way, popular in the community as well.

“The ownership believes that, if you want the support of the community, you have to support the community,” informs Janacek. “What’s the best part of being involved? You meet other people in the city, establish relationships and give back to a community which has allowed us to be successful.” The hotel enjoys giving back in a variety of ways to non-profit and charitable organizations by donating time, resources, funds and hosting events in the ballrooms and even in such non-traditional venues such as its outdoor courtyard entrance – another exclusive architectural feature.

Anytime Janacek wishes, he can look out the window at the sprawling Capital City, and that makes him nostalgic. Like the Chateau, he’s been in a prime position to watch Edmonton grow for many years. “The city is expanding,” he notes. “One thing people don’t realize is just how great our cultural diversity is. You have a travelling Broadway show? They stop in this town. Look at Garth Brooks. Nine shows? Wow! Maybe that’s common in Las Vegas, but in Edmonton?” He shakes his head in amazement at the changes to the old City Centre airport site, ICE District, and more. Yet he knows that no matter how big or progressive Edmonton gets, there is always room for the charm and elegance of his hotel.

“Thank you and enjoy your stay,” he says to the hotel’s patrons. “We will do everything and anything we can to make sure you are comfortable. When you leave here, you will tell your friends, who will tell their friends, and so on, and we’ll all be happy! If there is anything that is not right, please tell us. We’ll make it right.”

The property where Chateau Lacombe watches over the city is considered to be one of Edmonton’s “oldest corners,” and as the hotel watches the city sprawl further and further in every direction, its calm presence will keep the city anchored to the grace and history of yesteryear while providing all the amenities that will keep the hotel popular and modernized for another 50 years – and beyond.

Highlights of the first five years: