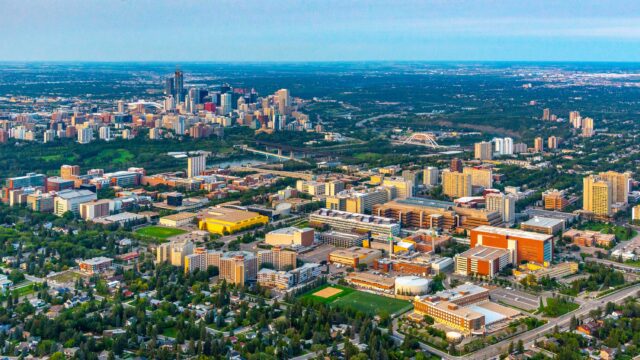 The University of Alberta moved up 16 places to rank 110th among the best places in the world to pursue post-secondary education, according to the latest QS World University Rankings.

More than 1,400 institutions around the world were ranked in the 2023 QS rankings, placing the U of A in the top 8 per cent globally and fourth in Canada.

“This ranking is something for our entire U of A community to celebrate,” says U of A President Bill Flanagan. “The fact that we are among the top 8 per cent in the world — combined with other great showings in international rankings this year — is strong recognition of the tremendous work happening across the U of A.”

The move up in the rankings comes with a boost in several important categories including academic reputation (up three spots to 139th), employer reputation (up 11 spots to 181st) and citations per faculty (up 20 spots to 237th). The U of A also jumped 21 spots in the faculty-student ratio category.

The International Research Network metric, which highlights the number of global research partnerships an institution is able to form, was the U of A’s highest category ranking (57th). This metric is not weighted in the final results.

In the categories that do count toward the final ranking, the most notable increase was in the international faculty ratio category, in which the U of A moved up 36 spots to 125th globally. This measure examines the attractiveness of the institution to academic staff around the world.

“These increases tell us that the U of A is regaining important ground in key metrics with international students, colleagues and employers,” says Flanagan. “These metrics are important as they reinforce our reputation as a place that attracts and nurtures talented people.”

Additionally, the U of A climbed 53 spots to rank as the world’s 11th most sustainable university by the Times Higher Education (THE) Impact Rankings in April 2022, highlighting the university’s leadership toward achieving the UN’s Sustainable Development Goals for 2030.

The university also had a strong showing earlier this year in the QS World University Rankings By Subject, in which QS ranks institutions globally in particular areas of study. The U of A was named best in Canada for nursing and petroleum engineering. Also notable among the subject rankings were sports-related subjects (16th in the world), anatomy and physiology (21st), agriculture and forestry (74th), pharmacy and pharmacology (85th), education (87th), medicine (90th) and accounting and finance (95th), among others.

QS analyzed 117.8 million recorded citations and 16.4 million recorded publications for this year’s ranking. There were a total of 124 new institutions entering to be considered, including three new entrants from Canada.