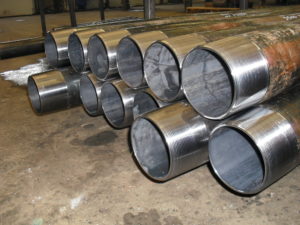 However, as important as the manufacturing industry is to Edmonton’s economy, both now and in the long term, it is taking a big hit as a result of the crash in the oil and gas market.

“We’ve gone through many ups and downs in the past, but this one seems to be lingering on a long time. Usually recessions last between 12 and 18 months, but this one is going on three years now, and manufacturing is definitely taking a hit as a result.

“Manufacturing as a whole is most influenced by the oil and gas industry. Some manufacturing companies are involved in other industries, like in the medical field, for instance, but for most part, the whole line of manufacturing relies on all aspects of oil and gas.”

Wynn Machine and Manufacturing specializes in custom machining and manufacturing, making products for other people, but almost all of their clientele have been connected to the oil and gas industry.

Wynn Machine and Manufacturing is in its 40th year in Edmonton. “It is a family-owned business that was started by my father in 1976,” states Chissell, and that longevity is part of what is helping the company to stay afloat now amidst an economy that is quickly forcing a lot of businesses under.

“We are established. I think that helps. We have a solid foundation because we have been around so long, and that adds to our reliability. Some businesses aren’t answering the phone, or have had to turn some customers away because their credit isn’t good enough to buy steel and materials. We’re still a reliable source, and that is helping us to keep going.”

Of course, Wynn Machine and Manufacturing’s reliability isn’t the only thing that is keeping it going. The company is also focusing on diversification and innovation, two aspects that hold a lot of potential for the company, both now and in the future.

“A few years ago, we developed a robotic cell that increases capacity,” Chissell explains. “We finished it just when things went south with the economy, so this unique robotic cell has been built and holds a lot of potential, but still has yet to be used to its full capacity.

“We’re also doing research on non-oil field customers. For instance, we just completed a project in the agricultural industry for a seed cleaning plant in Saskatchewan, and we are doing a lot of custom machining for the automotive and ATV industry to try to keep the guys busy. Focusing on innovation and diversification strategies that will prevent us from being limited to oil and gas is an important step.”

However, the recovery of the manufacturing industry depends as much on people’s actions now as it does on a future shift in the economy.

“Manufacturing creates a lot of skilled labour and specialized equipment, and to lose it would be a big blow to Edmonton, to Alberta, and to Canada as a whole,” emphasizes Chissell. “It’s really important that we don’t lose that skilled labour force. With the economy as it is, a lot of people are outsourcing overseas, but if we keep losing projects, we are going to keep losing our skilled labour force, our expertise, and our equipment, and when things do turn around, there will be nothing left to satisfy need. It will stall our economy. We went through this before with a lack of skilled labour. Now we have skilled labour leaving again, and the cycle will repeat if we don’t find a way to keep people here.”

“International competition is way overboard,” agrees Mark Wawrinchuk, project management/ estimating at Precision Steel & Manufacturing Ltd. “We just did two jobs where someone in China was offering half of our price. We can’t compete with that. People are showing no mercy; some are going to China, to India, and even to England to save a dollar. Overseas industries are beating our steel bids, and it’s been going on for two years since the oil prices dived.”

Precision Steel & Manufacturing will celebrate its 20th year in Edmonton on January 1st. The company specializes in modularization and materials handling conveyors for mining, particularly specializing in plate work, largely for the oil sands, but also for pot ash, diamond mining, etc.

“I started in 1980, so this is just another cycle to me,” Wawrinchuk says of the economic decline. “The current recession can definitely be equated to that of 82/83—actually, at this point it’s hard to say which one is worse. But right now we have low interest rates, and that is just barely keeping everything alive. If those go up, it’s over.”

However, there are a lot of factors in the works that will dictate the way the economy is going to go, particularly when it comes to the manufacturing industry. Wawrinchuk explains, “Things are bleak for the short term, but in the long term there is a new budget coming out, the president elect, the Keystone pipeline—there are so many factors that will dictate where this will end.”

Like Wynn Machine and Manufacturing, Precision has its longevity, and the buildup of experience that come along with it, helping to keep things moving forward. “We can reach out a little further because we’ve been around longer,” says Wawrinchuk. “Our 20 years in business helps—it all adds up. I also have 36 years of experience, and that helps, too—people actually call me up now for information.

“We’ve also focussed on diversity, “not necessarily with our clientele, but with different areas of industry, from wood to mining, you name it. We didn’t just stick to commercial building; we spread out, and that has helped us for sure.”

Wawrinchuk concludes, “Speaking for Edmonton specifically, the manufacturing industry is very important. “Edmonton is blue collar. Manufacturing drives the economy. There are a lot of infrastructure projects finishing up—Ice District isn’t going to sustain the economy forever—and a lot of people are going to be leaving if manufacturing were to go by the wayside, specializes and skilled labourers in particular. Then, when things do pick up, we’ll be in the same problem because there won’t be enough skilled labourers to do the work.”

Edmonton needs to take steps to sustain its manufacturing industry now in order to ensure it has a specialized industry and a skilled labour force that can carry its economy forward in the future.