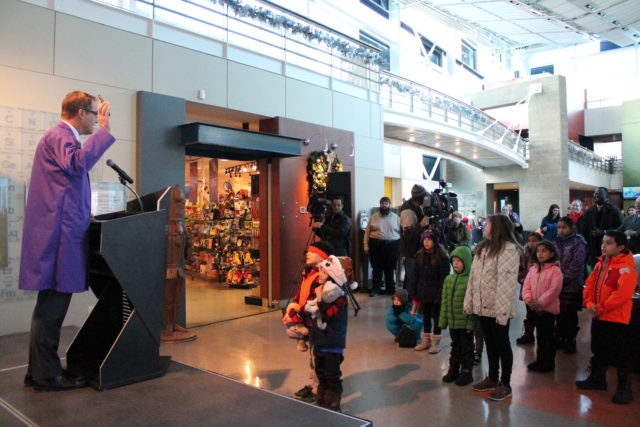 TELUS World of Science (TWOSE) was the site for the Alberta-based Discovery Agents company to launch their app in Edmonton. Edmonton Valley Zoo, Alberta Innovates and the Legislative Assembly of Alberta also partnered with Discovery Agents for the launch. Previously, the app launched successfully in Washington, D.C., Los Angeles and California.

Modeled after the augmented reality style seen in Pokémon Go, the app helps children and youth learn about plants and animals at specific mission sites, such as at TWOSE and the Edmonton Valley Zoo. The game states that there is a “secret network of animal agents” waiting to help the user discover the world around them. Unfortunately their Robot Queen has been kidnapped and the animals need the user’s help to save her. While it “won’t be easy,” the child is encouraged to get off the couch and go outside to start solving the mystery, which will unfold in public spaces such as parks and museums.

There is also a “build a mission” feature for users to create location-based missions where they are, and to link them with a growing network of mission sites in North America and Europe.

Missions can be played without Wi-Fi and can be adapted to use QR codes in museums and historical sites.

“We’re excited to host the Edmonton launch and we’re happy we can be a part of this innovative mobile game,” said Jennifer Bawden, director of science at TWOSE. “Discovery Agents is the perfect integration of science and technology, and a great way to get kids physically active and engaged in their learning.”

Elena Londeau, supervisor of Arts, Nature and History Experiences at the City of Edmonton is also in favour of the app, noting, “We are thrilled to be launching Discovery Agents at the Edmonton Valley Zoo. This is a unique opportunity for visitors to learn more about the zoo in a fun and interactive way. We hope this will encourage more people to get closer to the animals and find out about some of the zoo’s other initiatives.”

Bill Teeple, senior business advisor at Alberta Innovates, said “Discovery Agents is one of our new Alberta corporations. For over two years, we have assisted this digital education company to expand across the U.S. It is now poised for the Canadian market. Both Calgary and Edmonton have become first adopters of Discovery Agents in Canada, as a key learning experience for our young people. We are grateful to TELUS World of Science, Edmonton and the Edmonton Valley Zoo for leading the way in Edmonton.”

Looks like there is plenty of educational, active fun ahead for Edmonton’s youth.