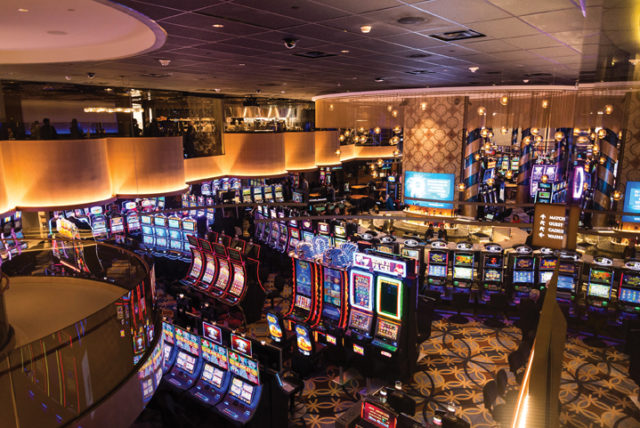 Grand Villa Casino, Edmonton’s new 60,000 square foot and $32 million gaming destination, opened late last year in ICE District. Within a very short period of time, the casino proved to be a worthy addition to Edmonton’s hottest entertainment centre, and to the community.

The Grand Villa has replaced Edmonton’s aging Baccarat Casino. Between opening day and the close of 2016, Grand Villa was visited by over 250,000 patrons and more than $100,000 was given in away in cash and prizes through the gaming facility’s kiosk promotions.

The Grand Villa’s restaurants have also been very busy. Atlas Steak & Fish was pleased to host several celebrities: local and visiting NHL players. These famous personalities enjoyed some of the 500 steaks that were cooked up between September and December 2016. More than 80 diners also had a go at Atlas’ whopping 48 ounce Tomahawk steak. Not to be outdone, the casual Match Eatery and Public House flipped over 12,000 burgers to go alongside more than 48,000 pints of beer.

The Grand Villa has also been very active in the community. By the close of 2016, the casino had awarded two bursaries in partnership with the Northern Alberta Institute of Technology (NAIT) for students pursuing careers in hospitality or culinary arts, donated $5,000 to the Royal Alex Hospital Foundation, sponsored The Kids Up Front Denim & Dice Fundraiser, volunteered hours at Meals on Wheels and the MS Golf for a Cure Tournament and signed a three-year partnership and title sponsorship for the SkirtsAFire Art Festival.

Services for a much younger demographic were also launched late last year. In November, ONE Properties and Katz Group, Oilers Entertainment Group (OEG) and the City of Edmonton gathered in the newly opened Edmonton Tower for the grand opening of Kids & Company, an early learning and child care centre.

“Kids & Company is an important addition to ICE District, providing parents who will come to work in the District with a nurturing and safe childcare facility,” said Glen Scott, senior vice president real estate, Katz Group said in a press release. “To have a top-quality child care centre within a top-quality building like Edmonton Tower is the perfect combination. We’re proud to officially welcome Kids & Company to ICE District.”

Victoria Sopik, co-founder and CEO of Kids & Company, said in a media statement, “What’s important for us is to help families balance their lives. So of course being a part of this ‘live, work, play’ project [identified by ICE District] is a perfect fit for us.”

The opening of Kids & Company is part of ICE District’s plan to create “a city built for all ages.”

From the adult entertainment of gambling to being a company focused on the wellbeing and development of children, ICE District proves, once again, that it is Edmonton’s destination of choice for everyone.