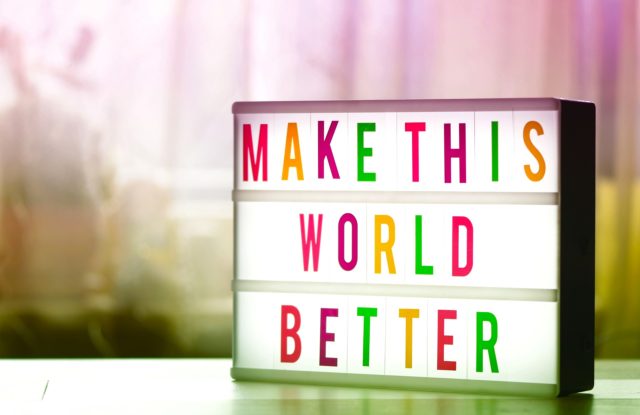 “Every time you spend money, you’re casting a vote for the kind of world you want,” is a popular

quote from author and activist, Anna Lappé. While Lappé’s work and research focuses primarily on creating sustainable food systems, her words are applicable to almost every facet of consumerism, and it isn’t just individuals who can use their money to vote for the kind of world they want to live in; corporations and corporate leaders can also use their profits to show where they stand. One way of doing so is by a long-standing business tradition, which can be traced back to the 1800s, known as corporate giving.

“Corporate giving refers to the social or monetary support extended to not-for-profit organizations, foundations, and charities. The benefits of a corporation taking part in corporate giving are plentiful – social responsibility recognition, brand awareness, corporate reputation, tax deductions, and even team building if a donation of time from staff is being extended,” says Amanda Kraayenbrink, manager at Rutwind Brar LLP, an Edmonton-based accounting firm that partakes in monetary corporate donations to multiple organizations.

“Individually, our staff takes on community volunteering roles with different organizations that interest them, and we support our staff by allowing them to take time off if they need to leave early for their commitments. For example, I donate my tax skills by helping compile tax returns for free to low-income families during March and April. I also have a weekly commitment throughout the year to help advise young teens on learning and applying business skills,” Kraayenbrink says.

According to the Canada Survey of Business Contributions to Community (CSBCC), corporate sponsorships, donations, and grants make up approximately $3 billion worth of funding to the charitable sector in Canada. The survey found that: 50 per cent of corporations contribute because it builds healthy and strong communities, 48 per cent of corporations are motivated to give because it fits with their values and culture, and 45 per cent give back because they believe it is the right thing to do.

“Commitment to social responsibility is one of PCL’s guiding principles, and community investment is at its heart,” says PCL Construction, who offered a collective statement based on its team’s sentiment. “PCL’s main forms of corporate giving are to organizations that better our community.”

PCL has partnered with United Way, a network of over 90 non-profit organizations across Canada that have been working to break the cycle of poverty for 51 years. This year, PCL’s Edmonton-area operations celebrated the milestone of being the first private-sector company to donate $30 million to United Way Alberta Capital Region. PCL has also formed partnerships with MS Society of Canada, Canadian and American Red Cross, and many other non-profit organizations and charities within each of its different district locations.

“Whether it is through organizing food drives; adopting highways; serving food to the homeless; walking, running or cycling to raise awareness for various causes; or donating to civic, regional, or national organizations, PCL has an unwavering commitment to helping and bettering the communities in which we live and work. Not only do our employee owners form a passionate network of people dedicated to being good neighbours and good citizens, but our culture of giving empowers PCL employees to help those in need. We believe it’s the right thing to do, and when we give back to the community, everybody wins.”

Corporations that partake in corporate giving, specifically monetary donations, can also benefit financially from these partnerships. Kraayenbrink explains that businesses are able to deduct donation amounts against their income and thus lower their tax liability. Corporations can carry monetary donations forward for up to five years and apply the deduction in a future year. Shares and securities that have accrued capital can also be donated.

Another private sector company that has formed a charitable partnership with United Way is Chandos Construction, a 100 per cent employee owned commercial builder, and the first and largest B-Corp certified general contractor in North America.

“We Build Better Together is more than just a tag line. It is our belief that we have a responsibility to give back to the communities we work in,” says Jennifer Hancock, director of innovative construction. “Over the last 20 years, we have donated $2 million to United Way. It’s our largest corporate giving campaign implemented across every office each year. The money comes from employee donations, fundraising activities and our corporate program that matches every employee donation dollar for dollar. Not only is this campaign a great team building exercise that provides connections from office to office, but what is most important to us is that United Way keeps the dollars within the communities where the donation is raised to provide people with pathways out of poverty.”

“One of our very first projects was with BBBS in Edmonton,” Hancock explains. “We originally built them a building but continued to volunteer time and provide resources over the years to assist with basic operations and maintenance, and our relationship with BBBS continues to this day. In fact, one of our project managers recently won the Prime Minister Award for Volunteerism for his extensive work with BBBS over the last 30 years.”

Chandos has also formed partnerships with NorQuest College and its 1000 Women campaign as well as the Greater Edmonton Foundation. Chandos employees have participated in Habitat for Humanity builds, Ride for Cancer, MS and Veterans mental health awareness campaigns, blood bank drives, and have helped build vital infrastructure across Canada. Currently, the company is working on the Kehewin water treatment plant so that people in Kehewin, who are on a long-term boil water advisory along with 56 First Nations across Canada, can have access to clean water. Chandos will also volunteer time to provide operating support to the Kehewin community over the next few years.

“Volunteer opportunities allow our staff to bond with one another while making a difference in their community. Group organized volunteer days signal to our employees that we are more than just a company that builds buildings and we care about more than just the bottom line.”

Employee passions and causes are also supported with a policy that entitles each employee to two volunteer days during working hours.

“One of our employees recently participated in the Wounded Warriors Battlefield Bike Ride in France and along with the donations he received, Chandos was his main sponsor. Adam is a veteran, so this was a cause near and dear to his heart, which made it near and dear to our company’s heart,” Hancock explains.

“In the next year, we plan on building at least 35 homes and buying back at least 30 homes from families who choose to move on from Habitat,” says Karen Stone, president & CEO of Habitat for Humanity Edmonton. “Our goal is to keep finding ways to strengthen our ability to serve more families and empower more children through the stability homeownership creates.”

“There are many benefits to partnering with Habitat for Humanity Edmonton,” Stone continues. “Not only do we provide charitable tax receipts and have a robust donor recognition program that ensures businesses are recognized in the community for their generosity, but partnering with Habitat helps boost employee engagement through team building opportunities. While on site, volunteers benefit by learning to communicate, collaborate, problem solve, learn new skills, have a bit of healthy competition and fun, and strengthen their team spirit while making our community a better place to be by helping local families.”

Habitat’s Adopt-a-Day program allows employees to get out of the office for fresh air and exercise and to build bonds with coworkers, or even friends and family. The cost is $2,500 for groups of up to 20 people. All safety gear, training and lunches are provided, and your company or group’s logo is prominently displayed on the build site. Groups also receive t-shirts, website recognition, lunch, and team pictures that can proudly be displayed throughout offices, social platforms and websites. There is even the option to raise funds online to cover the registration fee.

Stone says the greatest benefit of partnering with Habitat is building for the betterment of humanity.

“Doing something selfless that uplifts another human being is special in so many ways, and is the ultimate benefit that transcends the act of volunteering. It really stays with the individuals who participate even after their time with us is over. We are blessed by over 4,200 volunteers a year.”

Volunteering at Habitat’s ReStores, Prefab Shop, and build sites are just some of many ways corporations can support and help give back to the community. Corporations can also support Habitat by making cash donations, which go a long way towards making affordable home ownership a reality for many families. Habitat also relies on in-kind gifts of building materials or professional labour services to help build homes.

“These types of donations are incredibly important because they bring down the cost of building each home, which means that we’re able to help more families,” adds Stone.

Corporate giving does far more than bring benefit to the end users. It provides benefits for the donors and their teams, and has a positive effect that can last for many years.