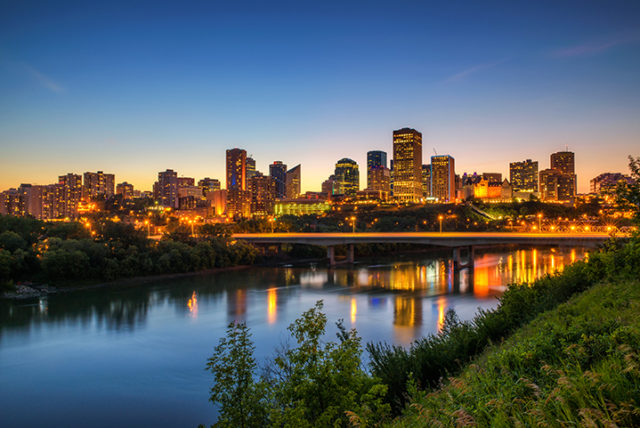 In just a few short years, the landscape of Edmonton has changed dramatically. The ICE District has revolutionized the downtown and new towers soar high above the city. There are exciting things going on in Edmonton, and that excitement is attracting and retaining corporations that choose the city as their base of operations. As of 2019, more than 1,600 companies have their headquarters here, including well-established staples like Stantec, The Brick, and EPCOR Utilities, along with thriving newcomers like Jobber.

The city is also busy shedding its oil and gas reputation. While energy continues to be a major economic driver, the types of business the city is attracting is more diverse than ever, with consumer and retail (442 headquarters) leading the way. Real estate (248), financial services (228) and business services (198) round out the top four. Technology and media companies continue to invest in Edmonton with major corporations such as Pure Canadian Gaming and Magic Lantern Theatres.

While this may come as a surprise to some, to KPMG, a global network of professional services firms that provides audit, tax and advisory services, the diversity among Edmonton’s headquarters makes perfect sense.

“[Edmonton has] numerous funding and support options, regardless of the stage of your business, including Startup Edmonton, TEC Edmonton, the ATB Entrepreneur Centre and the Edmonton Economic Development Corporation,” says Robert Borrelli, office managing partner for KPMG’s office in Edmonton. What makes Edmonton even more lucrative for potential headquarters and organizations is the access to a talented labour pool. “With large and esteemed institutions like the University of Alberta, the Northern Alberta Institute of Technology (NAIT) and MacEwan University, there is a readily available pool of talented labour, many of which enter the marketplace with innovative ideas and ready to make an impact.”

The Edmonton International Airport and a young and dynamic population (Edmontonians boast a median age of 36.5), also play a role in the city being a viable location to attract and maintain corporate headquarters. With Edmonton being Canada’s northernmost capital city, it’s a strategic hub for those looking to do business in the northern regions.

Additionally, the city continues to implement policies and practices to nurture a business friendly corporate environment. The recent cuts to the corporate tax rate (from 12 per cent to 8 per cent), gives Alberta the lowest corporate tax rates in Canada. Edmonton-based companies also do not pay provincial sales, payroll or capital taxes. While property taxes have risen over the years, Edmonton’s property tax per square foot remains amongst the lowest for major Canadian centres.

As corporations across Canada wake up to the realities of AI, machine learning, and automation, Edmonton is already pushing forward to capitalize on this growing trend.

The timing really couldn’t be better. According to KPMG’s 2019 CEO Outlook, which surveys 1,300 CEOs from around the world, including 75 from Canada, there has been a 16 per cent jump since 2018 in CEOs’ perception of embracing innovation and data analysis within their corporations,[1] and about 79 per cent of CEOs believe automation will create more jobs than it will eliminate. The CEO Outlook further notes that Canadian CEOs have already realized 12 per cent returns on implemented robotic process automation (RPA), with no other global CEOs reporting returns last year. Clearly, Canada is onto something, and knowing we must be a part of this evolution, the city is making the necessary investment to be a leader in this space.

Aside from the factors that make the city attractive in the commercial sense, Edmonton also has a reputation for being welcoming to all and offering a superior quality of life compared to other major cities.

Borrelli explains, “Initiatives like Edmonton’s Strategic Plan 2019 – 2028 will help ensure we continue to invest in the competitive development of our city, whether it’s striving to eliminate poverty, developing vibrant neighbourhoods, driving innovation or looking at clean and environmentally sustainable solutions.”

There are many reasons why Edmonton has bolstered its reputation as a coveted destination for corporate headquarters and will continue to grow in this regard. With an eye on continued diversification, constantly evolving infrastructure and increasing investment in innovation, Edmonton’s potential truly is limitless.

KPMG’s 2019 CEO Outlook can be accessed from the KPMG website. Visit kpmg.ca to gain valuable insights about the key factors that affect business on a global scale.