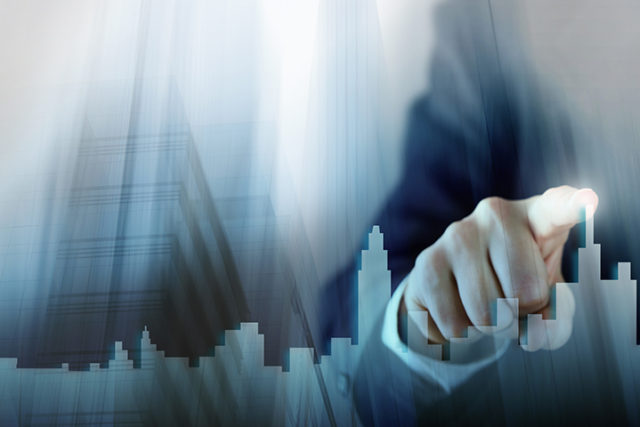 Edmonton is a city in transformation with new infrastructure redefining the downtown core and sculpting the ICE District, but are high commercial property taxes too steep a price to pay for infrastructure that meets the city’s growing demands—especially when it’s the businesses who are expected to pay?

Evidence of those high commercial property taxes can be seen in Edmonton’s commercial office vacancies. Recently, Edmonton’s office vacancy rates have been described as cautiously optimistic, but as Mark Barron Wilbert, partner and Realtor with Coldwell Banker Venture Realty, discusses, another word for that cautious optimism may well be “precarity.”

“Commercial office vacancy statistics year over year show an improvement,” Wilbert leads with the optimism before pointing to its precariousness, “but from the last quarter, vacancy rates have increased slightly with more supply available. The rental (lease) rates have not seen a substantial decrease to offset the increased supply, which is resulting in the increased inventory.”

Can this increase in office vacancy be traced back to commercial property taxes? Wilbert assures us it can. “It is partially due to taxes,” he explains. “Operating cost and taxes fluctuate yearly, and the expense is passed onto the tenants. With drastic increases, it will affect the tenant’s bottom line, especially since many landlords send out the operating cost adjustments after the fact and a lump sum amount is due by the tenant—an amount they may not have anticipated or have available. Depending on the circumstances and terms of the lease, a tenant may decide to move somewhere they can afford the rent.”

The other factor involves the new developments popping up downtown, Wilbert points out. These buildings are largely being filled by offices that occupied former downtown locations, leaving those buildings vacant. “Why not move to a new and shiny building if the lease rate is similar or less than what you have been paying previously? These vacant older buildings now need to be fixed up, modernized, and potentially repurposed to attract new tenants.”

“There has been concern about the increasing taxes over the last few years, and there have been cases where property taxes have doubled over a period of just a few years. It causes uncertainty for both landlords and tenants,” Wilbert stresses. “It is really difficult to budget and forecast your next few years of business if taxes are a surprise each year. I have recently dealt with a file where the landlord was no longer willing to agree to a gross lease for the simple reason that taxes are unpredictable. Some landlords have had to share the burden of the tax increase because the tenant was not able to cover the cost themselves.”

Caren Hui, founder/owner of Yogalife Studios, is all too familiar with the burden of commercial tax increases.

“A few years ago, there was a huge increase in property taxes at our north end location,” Hui recounts. “Our landlord ended up sending us our reconciliation invoice that equaled double our monthly rental amount. In one month, we had to pay an additional $30K based on the increased property taxes for that year. It was a significant setback, and it definitely adds to my reservations about investing and expanding to more locations.”

It also creates a lack of confidence among business owners who are skeptical about whether high commercial property taxes will improve the situation for businesses in the long run.

“Personally, I don’t feel that there is a cohesive understanding of how all these plans are meant to work with each other for the benefit of the city,” Hui confesses. “My immediate reality is that increased property taxes will always impede my business operations, whereas benefits from taxes are not usually directly correlated to increasing the flow of my businesses.”

“The City argues that 20 years ago, non-residential (commercial) properties contributed more as a percentage than they do today,” suggests Wilbert. “This stat does not take into account how vast residential communities have expanded in the past 20 years, compared to downtown and other commercial areas. Tax increases cover the City spending on paving roads, neighbourhood renewals, bike lanes, rec centres, etc., which have also gone up significantly in the past few years. A balance needs to be found, or the term ‘Edmonton disadvantage’ will grow and investors and landlords will continue to look to other cities that are more business friendly,” he warns, pointing to Holt Renfrew, which recently announced closing its doors in 2020 after being in downtown Edmonton since 1950. “In the long run, the market will adjust and correct itself, but to get there, there may be even more vacancies and the exiting of more businesses if no benefit or incentive to stay is established.”

Daniel Eggert, a member of Prosperity Edmonton, agrees, noting that it’s important for governments to be aware of the impact their decisions have on businesses, workers and job creation.

“Over the last 10 years, commercial property taxes have doubled,” Eggert states, “and in the last five years, the economy has been really tough on people and businesses. Businesses have been struggling. So, while business and wages have been flat since 2015, the increasing commercial tax bill has been a tough pill for businesses to swallow. When times are good and businesses and household wages are growing, people are less likely to be concerned about rising taxes; but when businesses are struggling and household wages are negative or flat, increasing taxes are more difficult for people to bear.

“That’s the tension point around taxes,” he summarizes. “Businesses are struggling, and rising taxes are hurting those businesses more, causing some businesses to leave Edmonton for lower tax jurisdictions like Acheson or Nisku, close down altogether, or reduce staff, which reduces jobs.”

Eggert points out that, while it is true that taxes pay for infrastructure, Edmonton’s population has been rising by approximately 2 per cent per year, and those new Edmontonians all pay taxes. “Growth of population largely pays for the infrastructure needed for that population—new roads, bridges, fire halls, etc. Further, a lot of the infrastructure dollars the City of Edmonton spends comes from the provincial or federal government, so property taxes are predominantly used to fund City services. There is value in services that benefit the community, but it is also important for governments to realize that public spending decisions have an impact on business confidence and job creation.

“Prudently managing operational costs creates numerous opportunities for the City, and the biggest opportunity for sustainability has to do with overall spending and personnel costs. The government has been increasing spending on average by 8 per cent a year over the last 10 years, and those spending decisions eventually impact tax decisions.”

“It is worth noting that today’s spending budget has reduced that increase down to a 3 per cent spending increase per year, which is an improvement from previous years,” Eggert stresses. “We appreciate that, and we appreciate that it’s not a change that can happen all at once. They are trying to bend the cost curve down. However, in the long term, it is important for governments to be aware of their spending decisions because they do impact the community.”

Eggert concludes, “Understanding the connection between spending and taxes is important because it has an impact on organic job creation. If we crowd out business with too much tax, jobs will go away – no one wants that. We want to grow business organically, but it’s government decisions that have a significant impact on business growth and job creation.”