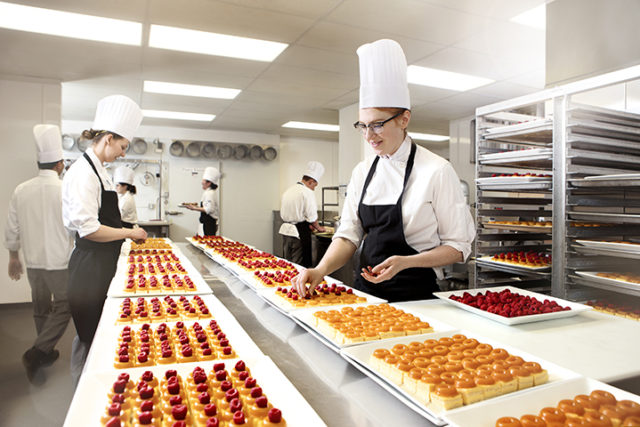 Welcome (Back) to the Edmonton Convention Centre

Downtown Edmonton’s largest event space, previously known as the Shaw Conference Centre, returned to its roots as the Edmonton Convention Centre on January 1.

The idea for a trade and convention centre to be constructed in downtown Edmonton first manifested in the early 1960s. Designed by local architect James Wensley (Manulife Place, Scotia Place), it wasn’t until February 22, 1980 that ground officially broke on the Grierson Hill location where the Edmonton Convention Centre stands today.

Construction required one of the largest soil and rock excavations ever undertaken in the world. More than 3.5 million cubic square feet of earth was excavated during construction—totalling approximately 12,000 10-ton truckloads of earth. Built into the riverbank underneath Jasper Avenue, the building was the first-known project in Alberta to use permanent post-tensioned tie-back anchors, extending 225 feet into the earth to prevent the structure from sliding towards the North Saskatchewan River.

Officially opened in 1983 as the Edmonton Convention Centre, the venue hosted Tina Turner, Prince Charles and the late Princess Diana in its first year alone. Backstreet Boys, Pearl Jam, Metallica, N’Sync, Guns ‘N Roses (among other notable acts) have all visited the venue since.

“Edmonton’s downtown convention centre has been an integral part of our community and growing skyline for 35 years,” said Richard Wong, general manager, Edmonton Convention Centre. “We have built our reputation on providing remarkable experiences while still maintaining an unwavering commitment to our people.”

The venue’s largest community program is Homeless Connect, a bi-annual tradeshow that was founded by the Edmonton Convention Centre and Homeward Trust in 2008. Over the course of one day, the event provides health, social and legal services to more than 2,000 marginalized and in-need Edmontonians.

In 2009, the venue was the first organization in Edmonton to sign up for the Edmonton Food Bank’s Second Helping Program. Every year the kitchen freezes and donates nearly 3,000 kilograms of overprepared meals to those in need.

Executive chef Serge Belair is at the wheel of a well-oiled machine that employs 30 cooks and 11 Red Seal chefs. For Chef Belair, supporting the local culinary scene and local producers is a no-brainer.

“The food served to our guests is grown by our community, for our community,” said Chef Belair. “If one of the largest commercial kitchens in Edmonton can support local and operate sustainably, so too can others in our city.”

Sixty per cent of the Edmonton Convention Centre’s food is purchased from local producers to reduce the environmental impact of food production and to support the local economy. Meats from Meuwly’s and cheese from Old School Cheesery often make their way onto charcuterie boards, while fresh produce from Erdmann’s Garden & Greenhouse or Forest Scene Farms can by found in salads and vegetable dishes.

The Edmonton Convention Centre kitchen is buzzing for more reasons than its award-winning culinary team. In 2016, the Edmonton Convention Centre welcomed their newest tenants—a hive of honey bees installed on the southeast corner of the property. The hive grows to approximately 100,000 bees each summer and can produce more than 90 pounds of honey. From sweeteners to speciality deserts, the culinary team uses the signature honey in a variety of dishes served to clients and guests.

In 2018, the Edmonton Convention Centre welcomed 7,500 global leaders to the inaugural Cities and Climate Change Science Conference and hosted the UN Women’s Safe Cities Global Forum which welcomed 20 nations to Edmonton. A growing demand for sustainable venues coupled with the venue’s existing commitment to sustainability helps position Edmonton as an attractive destination for progressive events.

“We work closely with event organizers from the very beginning of the planning process to make sure their sustainability goals are attainable and measurable,” says Melissa Radu, sustainability manager at the Edmonton Convention Centre.

The Edmonton Convention Centre’s in-house sustainability manager not only helps clients minimize the environmental impact of their events, but ensures the venue is doing its part too. The Edmonton Convention Centre was the first convention centre in Canada to receive the Green Key level five certification and it is one of only five venues in Canada to have received the prestigious ASTM International Certification.

On average, the Edmonton Convention Centre’s onsite waste management and recycling programs divert more than 250,00 lbs of waste from landfill annually. In 2018, the venue eliminated its use of plastic straws—saving an estimated 253,000 plastic straws each year (a distance that would stretch over 40 kilometres)!

“Sustainability can no longer be an afterthought. At our venue, sustainability is one of the fundamentals of planning and we enable our clients to set loftier goals that support the future of their events and our environment.”

Welcoming the World to Edmonton

The venue plays an important role in enhancing the city’s reputation in a competitive international market. In collaboration with Edmonton Tourism, the team at Edmonton Convention Centre focuses on attracting large-scale meetings and conventions to the city. Owned by the City of Edmonton and managed by Edmonton Economic Development (EEDC), the Edmonton Convention Centre welcomes more than half-a-million annual guests who, in turn, deliver more than $26 million in annual economic impact.

“We are excited about the possibilities to use the Edmonton Convention Centre name as a platform to elevate the local community and economy,” said Derek Hudson, CEO, Edmonton Economic Development. “The new name reflects EEDC’s continued dedication to building Edmonton as a regional, national and international destination for events, meetings and conventions.”

The venue’s reputation for warm hospitality and attention to detail proves it can punch above its weight among large convention centres across the continent. In 2018, it was recognized by the International Association of Venue Managers (IAVM) as one of North America’s five top performing venues­­—the only Canadian venue to receive this honour since 2012.

The Edmonton Convention Centre is anything but conventional. You may be surprised to learn a few new things about this Edmonton landmark: