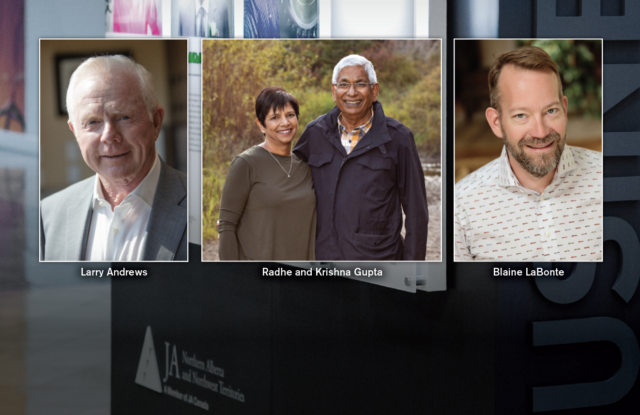 The Junior Achievement 2020 Alberta Business Hall of Fame Laureates and Innovator Award recipients being celebrated this year have helped to shape the province while proving that the resiliency of Alberta’s entrepreneurs always finds a way.

As Radhe and Krishna Gupta reflect on their careers, Radhe remembers the move to start his own company in 1990. After some initial success, 1994 and 1995 proved to be challenging years.

“Business was slow,” says Radhe. “We were almost ready to close in 1996, but we worked together, hung on, and kept pushing forward. Now, over the last 20 years, we have achieved business revenues of over half a billion. A big highlight for me was 2002, when my son joined the company.”

Krishna remembers, “I didn’t want to go into the business but when Radhe needed help, I got involved with operations and marketing. Soon, I fell in love with the business. The first time we won the Canadian Home Builders’ Association Home Builder of the Year award, I knew we were doing the right things.”

Both find Edmonton to be a warm, welcoming, respectful business community with business and political leaders working together for a successful city. They call the capital city, “good for startups and small business,” with “opportunity to get into the industry like we did, one step at a time.”

Rohit Group of Companies and the Guptas are known for their philanthropy.

“It gives me pleasure to give to the community. I have always firmly believed that giving is the only way of getting. Give respect, get respect. It’s not free. All the things you give come back to you in one way or another,” says Radhe.

“Giving is important,” Krishna agrees. “We should all leave the world a better place for tomorrow. We do this by donating and getting involved in the community. We teach our children and grandchildren to do the same. My grandson is only two and a half years old, yet already knows that sharing is caring.”

Both felt surprised and honoured when they learned they were Business Hall of Fame Laureates.

“I’m pleased they included Krishna,” says Radhe. “She is the backbone of the family and the business and has always been a support through tough times. I’m grateful to share this honour with her.

“I have quietly just wanted to do my best job in my personal and business life, and support other people that want to do the right thing,” says Krishna. “I really appreciate this honour.”

The Guptas look forward to enjoying their grandchildren, engaging in charitable pursuits, mentoring a flourishing team, and continuing to grow the business.

A highlight of Larry’s career is seeing mentors come into his life to offer guidance at the precise moment they were needed. “It’s been an interesting phenomenon,” he notes.

He also has an appreciation for the tough economic conditions his companies have seen from time to time in Alberta, because he was always able to see those times as ripe for opportunity.

“The National Energy Program in 1982 and those interest rates!” says Larry, “Back in those days nobody was bailing you out. The banks were exercising their security and taking people’s houses and assets. The 2008 crash, the current pandemic, it’s been an interesting time to have worked through all of this.”

Larry graduated from the University of Alberta in 1971 and practiced law for a few years. His investments were profitable, and life was good. When the first economic crash came, he leased some property he owned to the government and sold other plots of land.

“Along with downturns come opportunities,” he smiles, “Any crisis has danger in one hand and opportunity on the other. I just looked around, found things and found money when there were few things to find and little money to be made. I reinvested, scratched out an existence, and kept reinvesting.”

This strategy was so successful that Larry retired at age 29 and took his wife, three children, and a governess to Maui. He soon learned that being a businessman, and an Albertan, was in his blood. He missed home and missed the thrill of business, so he returned after a year and went back to being a working entrepreneur.

“Edmonton is my home,” he says warmly. “It’s one of the finest places in the world to live when you look at it in terms of security, economic opportunity, health and education. From a business standpoint there are plenty of opportunities here, even today – if you have the courage to pursue them. Right now we are fortunate that our provincial government has economic policies and infrastructure in place to create jobs.”

He’s pleased to give back to the community through the Andrews Family Trust.

“In 1991 a woman came into my office and talked about supporting Boys & Girls Clubs Big Brothers Big Sisters,” he says of what sparked his passion for giving back. “At the time I didn’t see other developers investing in these ideas because being socially minded wasn’t seen as being profit-driven. I wanted to spark more awareness of the impact businesses can have on the social structure. As we became more aware, giving back became more and more important. We give back through investment and time.”

He felt surprised, then honoured, to learn he was a JA Laureate, and he looks forward to the future, which includes continuing to work.

“I have travelled a lot, lived a lot, and taken all the time off I want. I can work as hard or as little as I want, but I still enjoy the competitiveness of working. If anything, my company is looking at expanding. I will also mentor my team and adult children,” he concludes.

Blaine is pleased that his legacy includes the family firm starting in Edmonton and growing into a global company. “Along the way, we created jobs and wealth for Alberta and Canada. Hopefully we were able to show some other Canadian businesses how to export and grow,” he says. “Now that the business is sold, we continue to mentor and invest in Alberta and in Canadian businesses and startups.”

He praises the business landscape, saying, “The Edmonton business community has no pretense! I’ve yet to meet a successful entrepreneur from Edmonton who wasn’t willing to help others. Edmonton is small enough to keep a sense of community, but big enough to grow great people!”

Giving back is very important for Blaine and his wife, Irene Mertz-LaBonte. The couple has been recognized for choosing NorQuest College to be the beneficiary of their life insurance policy, a gift that will provide a seven-figure sum to the college in the future.

“NorQuest is one of those gems that only Alberta seems to have,” Blaine explains of the generous gift. “The role they play in the education system is vital. For our new Canadians, Indigenous peoples, and people getting back on their feet, NorQuest is usually the first post-secondary education they encounter. NorQuest welcomes them and prepares them for further success through language instruction, skills training, or getting ready for more education. The core problem is that demand is extremely high. NorQuest always has several thousand students who are not funded by the province. Provincial education budgets only cover about 75 per cent of their spend. We give to NorQuest to try and cover this gap, and keep the programs going.”

Despite success in business and in the community, Blaine was shocked to hear he was a JA Laureate.

“I felt completely gobsmacked,” he admits. “I didn’t know I had been nominated, so when a friend called me to tell me the news, the shock almost killed me! Now that I’ve had time to reflect, I feel so honoured. The other Laureates are incredible community builders, so I have a lot of expectations to live up to.”

Now is a time of transition for Blaine.

“I’ve been spending the last year or so understanding how my role in life has changed. Selling the family business Is like seeing one of your kids leave home. I’m spending a lot of time working with organizations like the ThresholdImpact University of Alberta Venture Mentoring Service, Creative Destruction Lab, and volunteering for the Canadian military as an honorary colonel. I’m also an active angel investor, trying to create the next big business in Alberta. I’m trying to give back to our community, because it gave so much to me.”

Celebrate with Junior Achievement and this Years’ Laureates

Junior Achievement Northern Alberta has been inspired to re-energize its 40 year gala legacy to showcase entrepreneurship and philanthropy in a new light to young adults and businesspeople alike. The new format adds more valuable networking opportunities and an occasion for even presidents and CEO’s to learn something new and be inspired.

Select sponsors will get a two minute seat on the Inspiration Stage to deliver their own message of innovation, learning or inspiration, while guests take in cocktails and dinner safely spaced in an Alberta Health Services compliant program.

The new Business Hall of Fame inductees then take centre stage to share the stories behind their drive and success while being honoured for their lifetime achievements and service to the community.

The JA Northern Alberta Business Hall of Fame Celebration will also function as a fundraiser to support JA’s programs that inspire and teach youth entrepreneurship, financial literacy and work readiness. Tickets, available at janorthalberta.org/upcoming-events are: $3,900 for a table of 10, or $390 each. The event is scheduled for February 17, 2021, and subject to change if social distancing is still in effect.

Learn more about the 2020 event, the JA Business Hall of Fame and JA Northern Alberta’s programs at janorthalberta.org.