The newest Junior Achievement (JA) Northern Alberta Business Hall of Fame Laureates have demonstrated outstanding success in business and leadership in the community, inspiring peers and the next generation alike.

In a tradition stemming back to 1980, the JA Northern Alberta Business Hall of Fame showcases the province’s most accomplished leaders and community stewards. In addition to being inducted at JA’s annual Hall of Fame celebration, the Laureates are recognized on the Business Hall of Fame Wall of Honour, which is located on the second floor of Manulife Place in Edmonton. 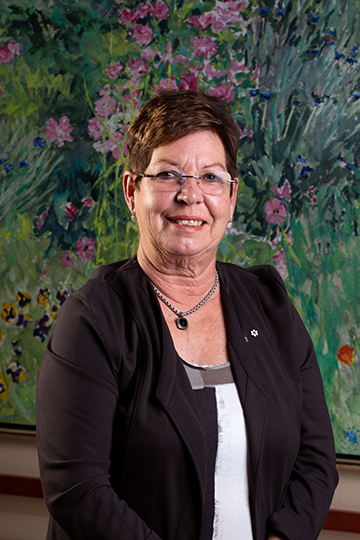 Roozen, the daughter of Dr. Charles and Marguerite Allard, fondly remembers accompanying her father to work where she learned from and observed his passion for caring for others. She graduated from the U of A with a Bachelor of Commerce Degree, then worked with the North West Trust Company until 1981, when she joined Cathton Investments Ltd. In 1983 Roozen became the director and secretary of the Allard Foundation.

In recognition of her business acumen and many successful positions on the boards of numerous local non-profit associations, Roozen has been recognized with a Queen Elizabeth II Diamond Jubilee Medal, an Alberta Centennial Medal, a MacEwan University Distinguished Citizen Award, a U of A Alumni Association Honour Award, a Global Television Edmonton Woman of Vision, and an Edmonton Citizens Award. U of A bestowed Roozen with an Honorary Doctor of Law degree in 2009, and she received the Alberta Order of Excellence in 2013 and the Order of Canada in 2015.

“The Allard Foundation was started by my father, the late Dr. Charles Allard, and was largely run by my father and myself. When he was diagnosed with terminal cancer in 1991, we expanded our Board of Directors to my brother Chuck Allard, a close business associate and friend Robert Manning and myself. In recent years we were joined by my niece Beth Allard-Clough as the Foundation Coordinator.

Giving back to the community has always been of importance to the Allard Foundation. It was founded on the principal that the community had been good to our family and we were fortunate to have been successful in our many endeavours. Our primary focus has been on projects related to healthcare, health delivery, education, social wellbeing and the arts. We have supported many initiatives over the years but here are a few examples in no particular order: University of Alberta, University Hospital Foundation, Alberta Cancer Foundation, MacEwan University, Covenant Health, Salvation Army, Telus World of Science, Crime Stoppers, Winspear Centre, Red Deer College and Pilgrims Hospice Society.

I am particularly proud that I took over the family business which, with the help of a strong management group, has grown and prospered to what it is today with interests in banking, broadcasting, real estate and investments. I am also very proud that the Allard Foundation, which started with an endowment of $500,000 has grown through prudent investing to the size it is today.

Junior Achievement provides the opportunity to mentor young students interested in business and entrepreneurship so they can learn from community leaders. JA follows a different model today with online learning and classroom participation; however, I remember the days when JA students had job shadow experiences at Allarco Developments (a related family company). My advice to new and aspiring Junior Achievers would be to work hard, don’t be afraid to take risks, to celebrate the successes and learn from your mistakes.

I have many people to thank for my success over the years but in particular, my late father Dr. Charles Allard, my company president and friend Robert Manning and my husband Harold. Going forward I hope to continue my board and community work, and I am looking forward to working with the Southern Alberta Light Horse Regiment as an Honorary Lt. Colonel; and of course, continuing work with Cathton Investments Ltd. and the Allard Foundation.” 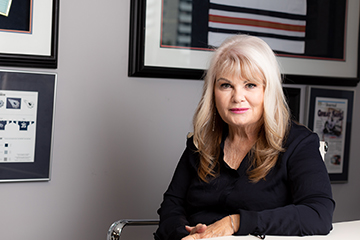 Lifelong Edmontonian Kyle-Buchanan has worked in the real estate industry for more than 40 years as a broker, developer, and proprietor. She is the CEO of Yorkshire Equities, the founder and developer of the Buchanan Centre (for Albertans impacted by Parkinson’s disease), and the Chair of the Gordon and Diane Buchanan Family Foundation (which has donated $16 million to local charities to date) in addition to sitting on the board of several private and public companies.

Kyle-Buchanan is the proud recipient of a Global Woman of Vision Award. As a lifelong Rotarian, the organization has honoured her with an Integrity Award, a Paul Harris Award and its highest recognition – an honorary membership. In 2019 she was inducted in the City of Edmonton Hall of Fame. Recently Kyle-Buchanan became the first female HL Colonel for the #1 Military Police Regiment for the Canadian Military Air Force, Army, and Navy Western Canada and the North West Territories.

“Giving back and advocacy are important to me because you can’t take out of an economy and not put back; and, if we don’t speak for others and help, society won’t work. I have found that everyone has to buy in and have a part to do so that they have contributed to their own future. The impact can be immense. Watching our clients and their families at the Buchanan Centre live better lives touches my heart.

JA means a lot to me because this is a longstanding educational group that is so fundamental. JA sets the stage and starts the thinking process for tomorrow. Many achievers are right there and who knows what they will become in the future after having the door opened for them. My advice for Junior Achievers in the program is, work hard and get as much education as you can. Treat people well, ask questions and take the high road…it is not as busy. Try to get as much hands-on experience as you can. Volunteer and learn to work with others. Build relationships with people. The future will be quite different than it is today. We are very much impacted by the entire world and those relationships are changing. All the best strategies and planning can be changed by one event. These past months have demonstrated just how much things can change. I believe new opportunities and practices will change from just this one event.

For me, being named a Laureate came out of left field. I was very surprised and honoured. My husband was honoured back in 2000. He was very ill at the time, but this was very special to him, especially the luncheon with the youth. I feel he would be really pleased for me.

I am thankful to and have I have learned from all my business partners. I am also grateful to Dr. Allard. I did land acquisitions for him. I’ll never forget, one day he said, “Diane I always leave a little on the table for the next person,” and I always have. I am very grateful for my husband Gordon. He gave every entrepreneur a chance and never asked anyone to do something he wouldn’t do himself.

Going forward the Foundation is expanding our facility to accommodate partnerships with other organizations that need space. We are also completing the splint and cast area at the Glenrose Rehabilitation Hospital. We are expanding our CAPE clinic, which assists vulnerable women with free family planning, and launching the Humane Society’s mobile surgical unit to spay and neuter animals in areas of Alberta that either cannot afford to, or are remote and do not have access to a vet. Over the next 36 months I will work with The Canadian Military to assist members and families whose loved ones are deployed to other parts of the world.” 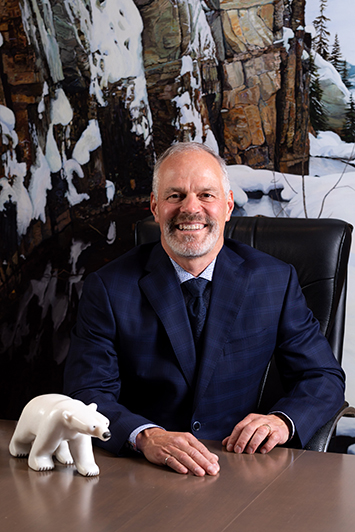 Cox grew Nunastar Properties Inc. to be one of the largest property investors and hospitality and tourism industry participants in Canada’s Northern Territories. Over the decades, Nunastar created thousands of jobs for residents of remote communities such as Iqaluit, Nunavut and Yellowknife, NWT and helped launch many careers. Cox also co-founded an oil and gas company as part of his private equity investment activities.

In 1983 he earned a BSc. in mechanical engineering from the U of A and become a P.Eng. in 1985. He followed this up with an MBA from Harvard Business School in 1987.

“As an entrepreneur, I’ve learned that if you care about people and you’ve put in the time to become an expert, good people will want to be part of your vision and help make it happen. Perseverance and a passion for what you do is important… you lose a lot of sleep as an entrepreneur!

My role as a leader of Nunastar is the most significant of my business career. The far north is an extremely difficult place to do business. You need solid experience and a balance sheet built to handle the elevated risks. We focus on quality and community building and we think decades down the road. As a result of this, we’ve played a positive economic development role for the north and helped create a lot of opportunity for locals. In the Northern Territories alone, wages and benefits paid by Nunastar and its subsidiaries exceeded $100 million since I acquired the company in late 1998.

In Nunavut, roughly 50 per cent of our supplier inputs are provided by registered Inuit-owned companies. We have a strong relationship with a 100 per cent Inuit-owned construction company and they’ve built most of our largest projects. Because of our scale, we are the only accommodations player that has traveled to Asia to directly market our products and northern tourism in general. The capabilities and services we’ve brought to the north have contributed to improved quality of life in our communities.”

Cox notes that Nunastar’s charitable efforts focus on the north where they do business. Cash and in-kind contributions often run into six-figures annually. In 2008, his company created the Nunastar Fund for Northern Children, which is now a multimillion-dollar endowment fund dedicated to the health, education and wellbeing of northern youth. Along with his wife Karen, Cox is a key benefactor of U of A’s Peter Lougheed Leadership College and they recently established the Cox Charitable Foundation.

He continues, “JA means a lot to me because I believe entrepreneurship has enabled many of the things we value most in our Canadian society, such as our quality of life. Basic skills awareness and financial literacy are critical to young northerners and Junior Achievement is one of the few organizations out there educating and delivering these important messages. Positive role models are critical for young people and Junior Achievement helps provide this as well. My advice for Junior Achievers is, believe in yourself and go for it! Don’t let some bumps in the road stop you. Leadership or career success is often characterized in the popular media as simple inspiration or innate talent, but it is much more about continuous learning, thinking ahead, being prepared, hard work and discipline, and understanding the consequences of your choices.

When I learned about my induction into the JA Hall of Fame, I was grateful and humbled! I’m thankful to my wife Karen and my kids who, for some crazy reason, always supported me… apparently believing I would survive the business risks I took to build the company. I’ve had many wonderful mentors who are very important to me. Also, I’m extremely grateful for the many wonderful people and partners I’ve had the good fortune to work with over the years.

Bob Stollery, one of Edmonton’s greatest business achievers from a past generation, once told me that ‘only the lead-dog sees the terrain.’ I never forgot this, so going forward, we’ll continue to invest and innovate in the north. We also look forward to growth opportunities in other markets as well.”

Cathy, Diane and Doug will be honoured at the Junior Achievement Northern Alberta Business Hall of Fame gala, presented by ATB, on November 24, 2021. Please visit the JA Northern Alberta website at janorthalberta.org for details. 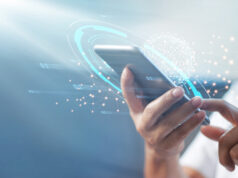 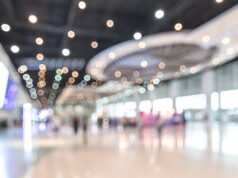 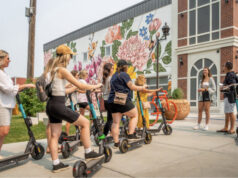