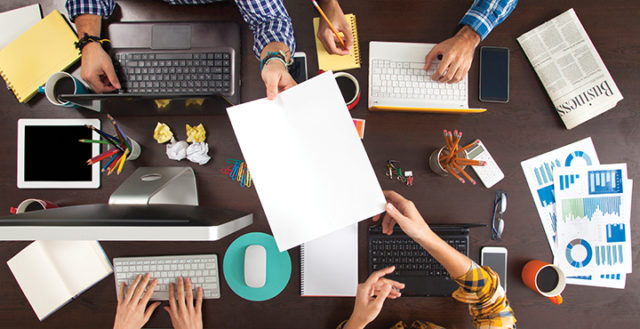 In 2010, software company Intuit released their 2020 Report, a glimpse into the future economy and working world at the start of the next decade. By analyzing market and labour trends, the report points to numerous important shifts that now, seven years later, are dominating the global economy.

“With continued credit shortages, enhanced ‘cloud’ services, broader contingent workforce and greater options for plug-and-play manufacturing,” the report explains in one key observation, “Small businesses will rely on variable cost business models to adapt, respond and adjust to the ever-changing marketplace.” In short, companies in the new economy need to be agile, adaptable and versatile.

Tied to this need for versatility and adaptability is the labour force itself. The traditional business model of long-term, salaried employees working for a company that offers career development, has been replaced by what experts call “the gig economy,” a trend in North American employment that sees a drop in full-time employment, even as employment rates remain fairly steady.

Between 1976 and 2014, according to Stats Canada’s Perspectives on the Youth Labour Market in Canada, men between the ages of 17 and 24 saw a 17.7 per cent decline in full-time employment rates; and, according to the report, “when they have full-time jobs, youth are now more likely to be in temporary jobs than in the past.” In Canada’s oil-producing provinces, including Alberta, youth “generally fared better than those in non-oil-producing provinces.”

Such changes in the labour market mean large, centralized operations are now being replaced with a series of offices located across the globe. The workers, too, are no longer lifelong employees but a network of contract labourers, part-time employees, and freelancers. Instead of a top-down, clearly defined structure based on experience and seniority, many offices are a web of interconnected parts where your closest coworker is just as likely to live in Mumbai as in Edmonton.

Many companies are turning to leadership development firms like IN.FORM. Established by former Edmonton Oilers accounts manager Tyler Waye, IN.FORM researches and analyzes leadership in new economies. Waye’s work has taken him around the world, most recently to China for a youth leadership conference, and given him a much-needed international perspective on the future of leadership.

He says the new world is about disruption. “There are two big disruptions happening,” Waye explains. “A market-led disruption and a people-led disruption. Businesses are being forced to adapt or be ready to adapt. Nobody can see when or where it’s going to come, but they know it’s going to come. Second, there’s been an evolution of work that’s sped up in the past few decades, an increased pressure on individuals, and the fallout from that is pretty sincere in people’s individual lives and for organizations that are trying to tap into the highest potential of their people.”

Heather Christensen, associate dean of executive education at the University of Alberta School of Business, agrees, pointing to recent companies that have completely changed their industries. “Ten years ago, Hilton Hotels probably never imagined that their greatest competitor would be a company that doesn’t own property,” she says, referencing Airbnb. “Uber is another great example – a cab company that doesn’t own any vehicles. These companies are disruptors and the challenge for leaders today is not just how they can predict and adapt to these changes, but inspire their workforce to help them become disruptors themselves.”

Today’s leaders are caught between these two major shifts: the increasingly remote workforce and the need to be quick, decisive and effective in their decision-making. Part of the problem, according to Waye, is in the term “leadership” itself. “I study and teach leadership and it’s absolutely something that has a million definitions thrown at it. It drives me nuts,” he says. “When we say ‘leadership’ here at IN.FORM, [we] mean the ability to set a new direction and bring yourself and others along. It’s very different from management, which was a name it gained 30 or 40 years ago. That was the idea that a business was trying to become more efficient and make the gears run more smoothly so they could outrun the competition. That’s certainly a concern for modern businesses, but now their top concern is ‘are we pointed in the right direction?’”

Troy Price, of Price Business Solutions Inc., has worked for over 15 years in the education and financial sectors. “Successful leaders, now and in the future, must learn to be nimble and make quick-time, accurate decisions,” he explains. “They must learn to rely on their keen intuition and trust in their people to help them move the company forward.”

At the same time, Price says, inclusion is key. “Leaders must be involved. They need to invest their time and efforts in understanding and appreciating the unique and diverse cultures that they are a part of and allow everyone to do the same. It’s important to be educated on matters like these and to promote it when possible.”

Part of that education is not just in high-concept abstraction, but in breaking down the assumptions that many businesses have in what works, and doesn’t. Christensen notes that one of the challenges she has discovered in working with Edmonton businesses is effective inclusivity where everyone has a voice but strong, decisive action is still taken. “Having a workforce that is diverse in culture and even geography requires a sensitivity to their culture and their working culture,” she says. “Some best practices here may be encouraging for many people and they will be able to contribute to the conversation. But those same practices may not work elsewhere. You need to ensure that everyone has a seat at the table, and that they feel comfortable voicing their opinions and concerns.”

Inclusivity in discussions and decision-making is just one aspect of effective modern leadership. Today’s leaders need to also understand the barriers other groups face in becoming leaders themselves. “There is research that shows diversity in your leadership makes your company more effective, so we have to understand what barriers stop certain groups from reaching those key leadership positions,” Christensen says. “Obviously, the big one on everyone’s mind is women. What barriers exist for women and how do we help them become effective leaders, but these challenges face a number of cultural groups.”

The global marketplace has changed almost everything about the modern office, from where it’s located to how people work within it, and that makes those that can lead corporations in this “new world” vitally important. Their value remains in their ability to inspire and, as Waye says, point their organizations in the right direction and recognize that there is strength in a diverse workforce, one that can be agile, create new solutions to new problems, and perhaps even cause a few disruptions in the process.