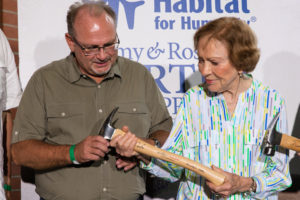 Habitat for Humanity® Canada (HFHC) had a very special announcement to make on World Habitat Day: former United States President Jimmy Carter and his wife Rosalynn are coming to Canada for HFH’s 34th Jimmy and Rosalynn Carter Work Project. The visit will take place in July 2017 and will kick off the 150 homes HFHC plans to build in honour of Canada’s 150th anniversary.

This will be HFHC’S biggest build project to date, and will take place in every province and territory across the country. Former President Carter and his wife will be focusing their efforts in Edmonton and Winnipeg.

“It is an honour to host President and Mrs. Carter. We are grateful for their support and the many volunteers whose commitment to Habitat’s mission has helped us empower communities through affordable home ownership,” said Mark Rodgers, president and CEO of Habitat for Humanity Canada. “These are homes that provide families with the strength, stability and independence they need to build a better life.”

President and Mrs. Carter have travelled the world with HFH since 1984, helping to build and improve homes. The couple’s philanthropy and efforts have played a very big part in raising awareness for the need of affordable home ownership across the nation. President and Mrs. Carter have inspired millions of people over the years and have worked alongside more than 100,000 volunteers in 14 countries. Their efforts have attracted the notice of HFH affiliates, who are now working on identifying and procuring build sites as part of the Carter Work Project.

HFHC’s mandate is to create affordable housing opportunities. Currently, one in seven households do not have access to safe and affordable housing in Canada, and sadly, this number affects well over 720,000 children. HFHC wants to stop the damaging cycle of families having to choose between paying rent and putting food on the table – a situation remedied in part by affordable home ownership. People that live in Habitat homes help to build their new house and pay an affordable mortgage. This progressive business model leads families to better living conditions, improves childhood development, reduces reliance on food banks and provides the ability to move out of social housing (which, in turn, frees up space for families on waiting lists). Every dollar invested with Habitat yields $4 in societal benefits, which has a direct, positive impact on education and employment, all the while reducing the burden on social programming.

HFHC believes that every Canadian family deserves a safe and affordable place to live and urges all Canadians to support the Carter Work Project. You can get involved as an individual, family or corporate team. To learn more, please visit habitat.ca/cwp and habitat.ca, follow HFH on Facebook at www.facebook.com/HabitatforHumanityCanada, and on Twitter at @HabitatCanada. HFHC also posts inspiriting videos on YouTube. Be sure to check the HFHC website for updates as the 34th Jimmy and Rosalynn Carter Work Project gets underway.