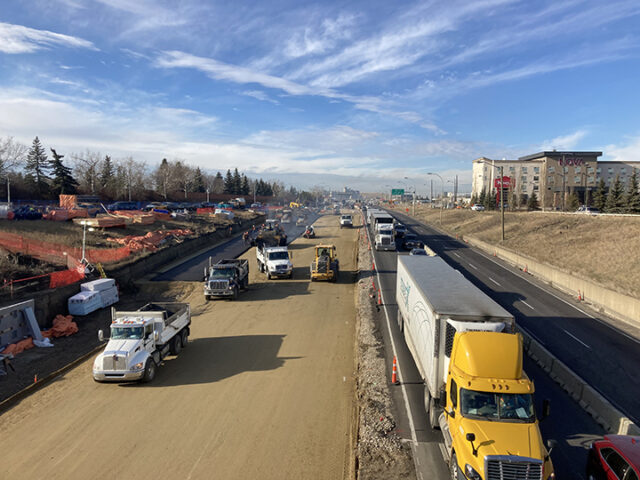 It’s a done deal. Full steam ahead! Last July, after 18 months of technical evaluation and much public input and engagement, Edmonton “opted for the plan which best meets the goal of providing free-flowing traffic along Yellowhead Trail, while offering convenient access to adjacent communities and arterial roadways,” says the enthusiastic Kris Lima, director of the huge Yellowhead Trail Freeway Conversion Program.

Designated as Highway 16 in GPS in all four provinces it crosses, the Yellowhead Highway is an interprovincial route that runs from the Pacific coast of BC, through Alberta and Saskatchewan and into Manitoba, ending in Winnipeg. It enters Alberta at Yellowhead Pass, travelling east into the Edmonton Capital Region as a four-lane rural Yellowhead Trail Highway, marking the western Edmonton city limit. The iconic, 24.6-kilometre (15.3 mi) expressway segment is a busy commuter route for Stony Plain, Spruce Grove, and Sherwood Park, carrying more than 80,000 vehicles per day, with significant truck traffic to and from the industrial areas of north Edmonton.

“Yellowhead Trail was first envisioned as a freeway decades ago,” he points out. “As part of Edmonton’s Inner Ring Road, it’s one of the city’s busiest roadways and is home to some of the city’s highest collision locations. The freeway conversion is needed to accommodate current and future traffic volumes.”

Although an Edmonton suburban bypass of the route was completed when the northeast leg of Anthony Henday Drive (Highway 216) opened five years ago, the City outlined a $1 billion plan, in late 2016, to upgrade Yellowhead Trail to a freeway, eliminating at-grade intersections and constructing new interchanges.

The total cost for the Yellowhead Trail Freeway Conversion Program is funded by all three levels of government with the federal and provincial governments contributing up to $241.6 million each, and Edmonton providing the balance. Work began in 2019 and planned for a 2027 completion. Construction is being done in a phased approach and is being timed and coordinated with consideration for efficiency to minimize impacts to road users, residents, and businesses. Lima adds that, throughout construction, while there will be periodic disruptions, Yellowhead Trail will remain open with at least one lane open in each direction.

Two key reasons for the conversion were to accommodate the area’s expected boom in traffic volumes and for increased safety. Existing stats and details show that, currently, approximately 63,000 to 81,000 vehicles travel Yellowhead Trail every day and projections indicate that traffic is expected to double over the next few decades, reaching volumes of more than 120,000 vehicles, daily.

Safety is also a key priority and motivation for the conversion. Lima notes that several intersections along Yellowhead Trail are documented as notorious collision locations. Over the last 10 years, an average of 1,000 vehicle accidents occurred annually on Yellowhead Trail. The new freeway’s traffic flow will help prevent accidents. “The renewed vision for Yellowhead Trail converts the existing stop-and-go expressway to a six-lane free-flowing freeway,” he explains. “It will include 10 interchanges, eight signalized intersections, as well as various non-signalized intersections and private parcel access locations.

“The freeway will greatly improve the overall safety of the corridor and improve the movement of goods and services into and out of Edmonton and the metropolitan region. It will enhance the reliability of the corridor while balancing program requirements with community, business and commuter needs.”

There are mind-boggling, complex details and specifics involved with the conversion master plan, but the detailed aspects of the 156 Street to St. Albert Trail segment are the largest and most technically complex. They include the removal of the existing at-grade intersections at 149 Street and 142 Street and construction of one-way service roads parallel to Yellowhead Trail to provide access to existing businesses and communities. The plan includes off-corridor upgrades along 123 Avenue, 124 Avenue, and 128 Avenue between 156 Street and St. Albert Trail to support the adjacent network.

“The heart of the freeway conversion is removing eight signalized intersections from Yellowhead Trail and making substantial on- and off-corridor improvements,” Lima says. “The program is being implemented through a combination of large and small projects, including off-corridor network improvements to support the new freeway, local businesses, and communities.” When complete, Yellowhead Trail will consist of six core lanes with a target operating speed of 80 km/hr.

Construction of the three year 156 Street to St. Albert Trail project began in 2021 and is scheduled for completion at the end of next year. While the $1 billion project took years of planning, design and apprpovals, the actual construction work is a colossal work in prograss, involving the exceptional skills and talents of area contractors like Lafarge, PCL and Standard General.

“This work is a large undertaking and requires major coordination from many different parties, land owners, utility companies and their contractors, Standard General and our sub contractor as well as the City and their consultants,” explains Matt Lamer, Standard General’s project manager of the Yellowhead Trail project. “On any given day there is anywhere from three to 12 different companies working on the project with four different consultants and City reps. A typical day has between 25 and 75 people working on the project with thousands of manhours each and every week.”

Lamer points out that, in order to accommodate ramps that can safely handle the volume of traffic, additional lanes and road widenings needed to happen. The widenings required major structural work at the 156th Street and St. Albert Trail Bridges, including retaining walls in each location. “Another result of the widenings are utility relocations of existing infrastructure. Many underground and utility infrastructures are old and need to be replaced with upgraded and higher capacity materials and sizes.

“Everyone on the project is pulling together to have the work completed by the end of 2023. At completion, traffic will move much smoother through the city and particularly alleviate congestion and harmful idling.”

In addition to the state-of-the-art efficiencies and improvements related to the massive Yellowhead Trail Freeway Conversion project, it is also a win/win for the Edmonton area, with the creation of approximately 6,000 direct, indirect and induced Alberta jobs and approximately $430 million in wages over the project’s 10-year design and construction period.

“The freeway conversion is more, much more, than a road construction project,” Lima emphasizes. “The corridor-wide program goes way beyond road redesign and into a transformation that will contribute to a sustainable city and community well being. We want to connect people, communities, and businesses. Yellowhead Trail is an important corridor for businesses right now and the freeway conversion will enhance its importance. We want to ensure the work we do retains and attracts business activity along the corridor.

“It’s exciting to be on the team bringing this transformational vision to life for the city, for Edmontonians and for the entire region.”