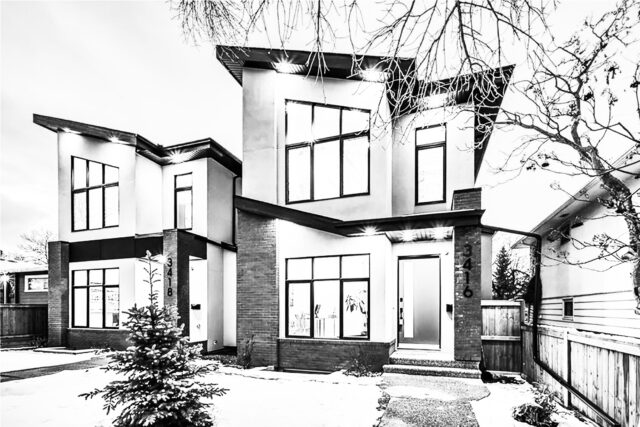 Spiking mortgage rates, the ‘hot market’ trends, post-pandemic recovery, affordability, the increasing popularity of infills and the high and lows of real estate, continue to make fort an interesting but bumpy ride for the Edmonton real estate market.

“Looking back at the start of the global pandemic in 2020,” explained Paul Gravelle, board chair of the REALTORS® Association of Edmonton (RAE). “Many people expected the real estate market to take a huge hit. The way people viewed their homes shifted dramatically as a family’s wants and needs changed. Nobody could have predicted what lay ahead for the housing market in the months to come.”

The Association saw record-breaking sales in March 2022, hitting a high of 3,283 sales for the month. Average prices for single-family homes also hit an all-time high of $510,988 in April of this year.

In Edmonton, as in most major Canadian real estate markets, affordability is a key factor. “With the Bank of Canada’s announcements earlier this year, as they increased its policy interest rates to battle inflation, we’ve started to see the impact of these increases in the housing market,” he adds.

“Prospective homeowners may need to be prepared for more hikes in the coming months as the Bank of Canada tries to return to those more normal, pre-pandemic rates. “

Although not as severe as Vancouver, Toronto and Calgary, affordability continues to impact Edmonton real estate. According to RAE chair-elect, Melanie Boles, “It’s costing Edmontonians more to borrow, and they may find themselves unable to afford what they may originally thought. This could affect the types and price of homes selling, as people may start to be priced out of the market, which isn’t necessarily something they would have been dealing with even a year ago. Prospective buyers and sellers may also start to get cold feet and rethink their situation, and we could ultimately see inventory and supply numbers affected.

“While Alberta has always been long regarded as an affordable place to call home, with interest rates and inflation on the rise, housing affordability issues are becoming more prevalent. As average prices for single-family homes near the half a million-dollar mark,” she cautioned, “the dream of home ownership becomes less attainable for many young adults, couples and families who may be looking to purchase their first or forever home.”

In addition to conventional residential real estate sales and listings, the surging trend of infills is also impacting certain Edmonton neighborhoods. In the art and science or urban planning, infill is a growing phenomenon. Technically, it is defined as the use of land within a built-up area for further construction, especially as part of a community’s redevelopment or growth management program or as part of what’s sometimes called smart growth.

“People are drawn to areas with amenities. You will often find residential infill projects close to transit stations, universities, and main streets, which usually have beautiful and vibrant commercial infill projects as well,” said the enthusiastic Mariah Samji, executive director of IDEA, the Infill Development in Edmonton Association.

“Infill is not a trend. It is a movement. Cities all around North America have been shifting growth patterns for some time in response to people’s needs. Infill is more than just new single detached houses in existing neighbourhoods–it refers to any kind of redevelopment, including row housing, and apartment housing too.

“Infill provides housing options, helps to reduce urban sprawl–which helps stretch our tax dollars further and reduces the tax burden on all of us–and it also has a positive impact on the environment. Infill also helps brings back residents to neighbourhoods that have seen population decline over the last few decades, leading to negative side effects like school closures,” she said.

Boles admits that “There has been a lot of conversation around infills in the Edmonton region, and why they may be gaining popularity among prospective buyers. There are a variety of benefits that come with infill developments, as they help to create diverse and vibrant neighbourhoods by providing options to meet everyone’s needs.” Stats show that the number of Canadians aged 30-39 is at an all-time high. With this demographic group looking to grow their family, an infill neighbourhood may be the ticket to gain more space while enjoying all of the positives that come with a mature area including walkability and established public transportation.

“While there can be higher costs associated with infills,” Paul Gravelle said, “the long-term benefits to our local communities, economy and environment may help to offset those costs.”

Al things considered, the real estate professionals agree that the positives of infills outweigh the challenges. “Infills come with many benefits at the city, community and personal level,” Samji emphasized. “Cities are working to reduce their environmental and financial footprints.  Expanding new neighbourhoods on the outskirts of the city adds significant environmental pressures through an increase in transportation emissions, it adds operating costs such as snow and waste removal, fire and police stations and road maintenance. Redeveloping our mature neighbourhoods allows us to reuse and repurpose existing amenities, which in turn helps us to become more financially and environmentally sustainable.

“At a community level, we have beautiful older schools with low attendance rates, bus routes with low ridership, and local neighbourhood restaurants that need a certain amount of density in order to thrive. All of this can be helped by increasing the population in a neighbourhood through infills.”

Boles noted that the number of Canadians aged 30-39 is at an all-time high. “With this demographic group looking to grow their family, an infill neighbourhood may be the ticket to gain more space while enjoying all of the positives that come with a mature area including walkability and established public transportation.”

Real estate and developments stats and surveys show that established or mature neighbourhoods have been seeing a decline in population over the last decades. In the 60’s and 70’s, families were having more children, and those families could afford to buy a home quite easily. Today those same neighbourhoods have their population decrease as children have grown up and moved away, and the cost of that land has significantly increased.

In Edmonton, for various reasons, some neighborhoods are more popular than others when it comes to infills. According to the City’s Infill Data Explorer, there are several areas in both core, mature and established and developing areas that have increased infill activity, like mature, core neighborhoods of Garneau, Oliver, Westmount, Strathcona and Parkdale, as well as the established and developing neighborhoods of the Chappelle Area, Keswick, Glenridding Ravine, Tamarack and Ermineskin.

“In Edmonton, our Municipal Development Plan, City Plan, talks about shifting Edmonton’s development patterns to accommodate 50 percent of our growth through infill,” Mariah Samji pointed out. “People will be able to see this over time as schools in mature neighbourhoods fill up with local kids, small-scale commercial projects pop up in neighbourhoods, and different housing options become more widely available through semi-detached homes, row housing, and apartments. This will allow seniors to stay in the neighbourhoods they love and people to live in communities that fit their needs.”