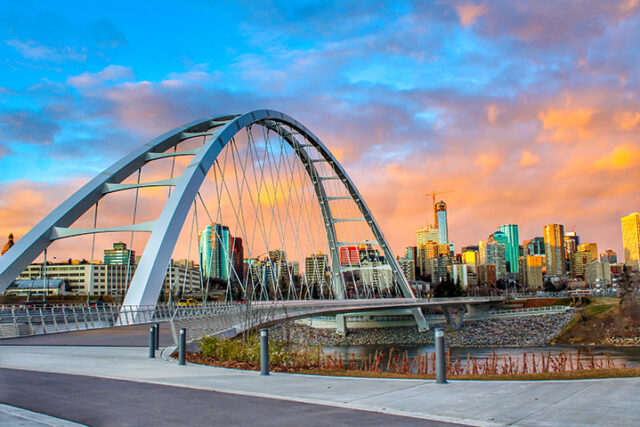 Edmonton is a diverse city in every way and that includes our variety of business interests. While Calgary usually gets touted as the “head office capital” in Alberta, Edmonton also boasts a diverse array of head offices and that’s never been more apparent than in recent years.

Edmonton has always been a great place to live but over the past few years the City has invested in promising partnerships and made transformative commitments, which means a lot of exciting things for businesses and Edmontonians.

Let’s take a closer look at what is driving our city forward.

The Edmonton metropolitan region is being reimagined under the concept of Port Alberta. A collaborative effort, this partnership aims to develop the city into an international shipping and logistics hub – promoting our city as a major manufacturing, cargo and shipping hub for air, road, rail and pipeline distribution. Naturally, this is attracting a lot of attention from businesses and head offices as it decreases the cost of doing business and increases the ease of reaching customers across the world.

An Abundance of Skilled Labour

Edmonton is one of the fastest growing, youngest cities in Canada, and that comes with some clear advantages. Workers in Alberta boast the highest productivity rate in Canada. Our strong and world-class post-secondary institutions, including the Northern Alberta Institute of Technology and the University of Alberta (U of A), empowers 65 per cent of the local labour force with post-secondary or apprenticeship training. This means employers looking to establish their head offices here have access to a first-class, trained and empowered workforce.

The tech scene is exploding within the city with investment from all levels of government, especially from organizations like Innovate Edmonton, a division of the Edmonton Economic Development Corporation. Edmonton saw a 26 per cent increase in tech jobs over the last five years.

Since 2020, Edmonton’s innovative ecosystem value grew by more than 230 per cent and is valued at more than $640 million. In 2020, Alberta’s technology sector hit an all-time high for venture capital investment with $455 million in deals.

A huge factor in this growth can be attributed to the post secondaries in the area. For instance, the U of A ranks in the top five in the world for artificial intelligence (AI) and machine learning (ML), according to CSRankings, and the federal government has recognized Edmonton as one of three national hubs for the AI sector in its Pan-Canadian Artificial Intelligence Strategy. The existence of innovation drivers, such as Innovate Edmonton and Alberta Machine Intelligence Institute (Amii), further drives the opportunity for startups to not only succeed but thrive within our city.

Environmental accountability is changing across all levels of business and the City of Edmonton is no exception. The revised Energy Transition Strategy & Action Plan outlines how our city plans to transition to cleaner energy including attracting energy innovators to our city; exploring energy efficient buildings, powered by renewable energy; and looking at carbon neutral developments. A great example of the city’s (and surrounding area’s) commitment to this initiative is the launch of the Edmonton Region Hydrogen HUB – focused on accelerating the production and distribution of hydrogen fuel to help the city achieve their goal of net-zero emissions by 2050. Not only does such investment boost our economy and create new jobs, it also helps ensure the local environment is preserved for generations to come.

Edmonton is More Than a Great Place to do Business

The way forward in continuing to attract head offices to the region is multifaceted, and the City of Edmonton has a detailed City Plan to help ensure that remains top of mind.

Ensuring a great quality of life for the local workforce is crucial. Edmonton routinely lands on “the best places to live” lists, including our most recent nod in the global BEST CITIES ranking where we landed in the top 100. Reasons for the consistently high rankings include the outstanding education available at the University of Alberta; strong immigration numbers; and the quality of life outside of work driven by festivals, dining, events, and affordable housing. Let’s not forget to mention the 88 kilometres of river valley park that runs through the city – one of the largest urban parks in North America and 22 times larger than Central Park.

While the City continues to look ahead in developing a sustainable and dynamic city, they would be remiss to not also acknowledge the past. For instance, the City of Edmonton’s Indigenous Framework guides the journey of reconciliation and relationship building with the Indigenous population. It’s intended as a guide to help strengthen and support the City’s relationship between Indigenous and non-Indigenous Peoples.

Edmonton’s future has never been brighter and it’s not just because the rising cost of oil.  As evidenced above, Edmonton has, and continues to be, a place where people want to work and live. The tech and innovation scene continue to grow and more startups are calling Edmonton home. When combined with the ongoing investments the city is making in building a more sustainable local economy, the capacity for new economic opportunities seems endless.