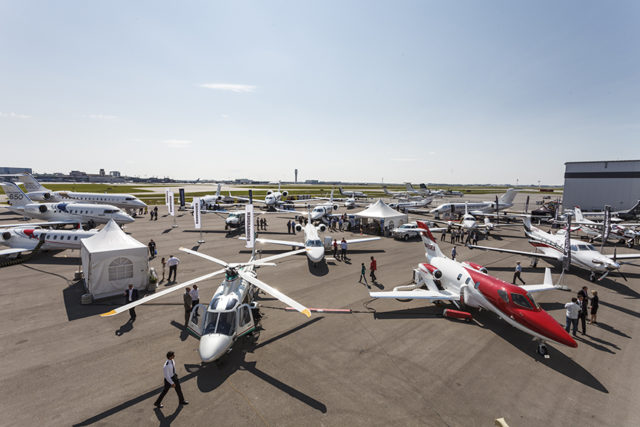 But, there is another aspect to business aviation that is equally important and has the potential to provide great benefits – manufacturing. There are a lot of elements to aerospace and aircraft manufacturing including the airframe, engines, landing gear, interiors, avionics and more.

Historically clustered in Quebec and Ontario, other provinces including Alberta are working to develop their own capacity in some or all of these areas and get a piece of that pie. And there are a lot of reasons why this may be one of the smartest investments any province could make.

To start, there’s a solid foundation. Aerospace/aircraft manufacturing has been considered a strategic sector in Canada for many years. That means it has had the weight of government investment and policy behind it, pushing it forward. And the investment has paid off with Canadian companies that have become marquee brand names around the world: Bombardier, Pratt & Whitney and CAE among others.

Canada’s aerospace sector is comprised of some 700 companies generating direct annual revenues of more than $28 billion in 2014. The industry is highly integrated into the global value chains and exports 80 per cent of its production globally. A large part of this is business aircraft: airframes, engines, simulators, landing gear and finishing.

Canada leads the world in business jets, engines and simulators. The high demand for Canadian-build business aircraft has positioned Bombardier Business Aircraft as the industry leader in new business jet deliveries. Pratt & Whitney Canada estimates that every second a P&WC-powered aircraft takes off or lands somewhere in the world. CAE, the world’s leading supplier of civil flight simulators, directly supports business aviation through its global network of training centres and innovative technologies to deliver simulation-based training tools along with its experienced instructors.

The success of Canadian aviation companies rests on a number of factors, all of which help develop the sector even further. Canadian companies and post-secondary institutes invested $1.8 billion in 2014 in aerospace-related research and development – a critical metric in a world where countries vie for the best and brightest minds to create innovative technologies. The research is supported by a nationwide network of provincial post-secondary educational institutions that offer aviation and aerospace-related courses.

Many of Alberta’s leading educational institutions offer these learning opportunities, providing advanced degrees, diplomas and certificates in a wide variety of fields that include aeronautical engineering, science, robotics and other advanced technologies, imaging and drafting, design, avionics and maintenance engineering, among others. Students are also exposed to cutting-edge research, including machine learning, nanotechnologies and more.

Governments support many different sectors as they diversify and strengthen their economy and export base. Looking at the benefits of aviation and aerospace, it is clear there are many reasons why Alberta would build capacity in this key sector. For one thing, with an average salary of $91,900, aircraft manufacturing and related opportunities are one of the most lucrative sectors in the country, boasting some of the highest wages in Canada for skilled labour. Moreover, the skill sets and expertise it requires are transportable from jobs in other sectors – something that is particularly desirable as the province works to diversify its economic base.

Alberta’s commitment is showing a strong return. According to the province’s website, the industry contributes $1.3 billion in revenue annually to the provincial economy, is home to 170 aerospace and aviation companies, and employs over 6,000 highly-skilled Albertans. Among other niche capabilities, Alberta-based companies provide maintenance, repair, overall and modifications of civil and military aircraft, made up of small companies that create highly-specialized products.

Alberta is home to global brands such as Viking, manufacturer of the Twin Otter and other iconic Canadian aircraft, and houses Pratt & Whitney Canada’s assembly and test plant in Lethbridge. The province has 25 per cent of Canada’s 1,900 geomatics, navigation and global-positioning firms, exporting 60 per cent of its wireless communications and sensor-technology products to U.S. and European markets.

These successes come as no surprise to Rudy Toering, president of CBAA, who has been noting the growth for years. “Alberta has always been a linchpin for business aviation; both in how Alberta companies use their aircraft and now, how the province is becoming a player on the manufacturing side.”

Toering describes the long-standing and strong relationship between CBAA and the Alberta business aviation community. “We work with the Government of Alberta to support their efforts to develop the export market, and our annual national convention is held in Alberta frequently,” he says. CBAA was last in Alberta at its Calgary convention in 2016, where it broke attendance records. “It was one of the best-attended and overall highest-quality conventions we held in years,” says Toering. “It’s a testament to the dedication and passion of the business aviation sector in Alberta.

“With this year’s national convention, we are staying close to our Alberta base, holding our event in Abbotsford, B.C. in August. For the first time, CBAA has partnered with other major aviation groups to create a one-of-a-kind event that marries the best of CBAA’s convention, exhibit and static display of aircraft with one of North America’s biggest airs shows and a major aerospace conference,” Toering says. “The response has been very enthusiastic and I see this as part of how Western Canada is stepping up its presence in aerospace. I look forward to welcoming my Alberta colleagues to CBAA 2017.”