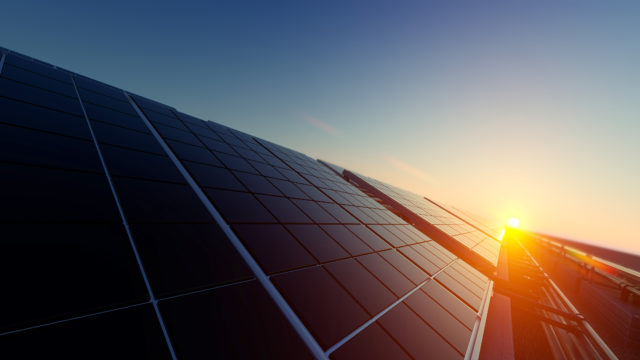 The low-carbon emitting gears are turning. Greener solutions are gaining incentive through federal initiatives such as the Powering Past Coal Alliance, the Low Carbon Economy Fund, and clean technology programs supporting businesses investing in environmentally sustainable practices. On a provincial scale, going green has made waves despite the province’s long reigning and meticulously maintained dependence on oil and coal.

The Renewable Energy Act aims at transitioning Alberta to 30 per cent renewable electricity by 2030 – an ambitious goal set by the leading energy sector contributor in the country. Through the Renewable Electricity Program (REP), the province set its sights on adding 5,000 megawatts of renewable electricity to the market. The program secured 1,360 megawatts through three rounds of funding and established frameworks for the development of renewables in the Albertan market. The decision to not move forward with additional rounds of REP reflects a priority set by the Government of Alberta to reduce government spending and prioritize market-driven renewables.

Alberta’s last five years have not been blessed by the bounty gifted by the oil boom. Many Albertans find themselves mulling over growing unemployment rates and prospects in the energy field as Alberta is steered toward a market-driven renewable power industry.

The future of environmental sustainability has felt uncertain for Edmontonians. In the wake of the global climate change crisis and other challenges, a critical eye is focused on Alberta’s energy industry and pressure to invigorate the economy while staying mindful of environmental realities is high. Though recent changes have left some puzzling over how the province will hit the 30 per cent goal, local companies continue to make strides and look forward to a cleaner tomorrow.

Capital Power has a long history of investing in sustainable energy practices. Since the company’s creation in 2009—the result of an initial public offering divvying up EPCOR’s power generating and business assets—Capital Power has been a key player in the industry.

The Edmonton-based company has been steadfast in pushing for reduced carbon emissions at the Genesee Generating Station west of Edmonton. The facility consists of three generating units which provide over 1,300 MW of reliable baseload generation for Albertans.

“We’re advancing a slate of projects at Genesee to provide competitive, reliable and responsible power for years to come and we’re targeting a 50 per cent reduction in carbon emissions intensity by 2030 from 2005 levels,” says Kate Chisholm, Q.C., SVP, chief legal and sustainability officer.

In 2016 the company launched a five-year, $45-million, GPS efficiency improvement program, targeting a 12 per cent reduction in carbon emission intensity by 2021. More recently, the energy leader announced a dual-fuel project. The $70-million project will transform all three Genesee units to complete dual-fuel capacity, using up to 100 per cent natural gas or a combination with coal until it is phased out in 2029.

“We’re helping to advance innovation and technologies that will be critical to the power system of tomorrow by testing and integrating carbon conversion into our power generation, alongside renewables, to build a decarbonized energy future,” Chisholm shares.

Perhaps the largest project on the company’s sustainability plate is the construction of the Genesee Carbon Conversion Centre (GC3). As the world’s first commercial scale production facility of carbon nanotubes— a substance often used as an additive to increase the strength of materials like concrete, steel, and aluminum—GC3 will utilize emissions and power from the Genesee facility alongside carbon conversion technology to produce valuable carbon nanotubes. Once complete, the GC3 will be capable of generating 7,500 tonnes of this carbon-based additive annually. The company has supported and advanced the deployment of several carbon capture, utilization and storage (CCUS) projects since 2007.

“We have been committed to sustainability since day one, and we continue to passionately work to support the transition of our energy system to deliver reliable and low-carbon power. This transformation requires collaboration across the board – from industry, governments and communities,” Chisholm states.

Capital Power isn’t alone in the mission for environmentally friendly practices in Edmonton. With the oil and gas industry in transition, many have looked outward and found ways to apply their skillset to the evolving energy market. Kuby Renewable Energy Ltd.’s creators Adam Yereniuk and Jake Kubiski saw an opportunity in oil’s decline. The pair transitioned from their careers in the oil and gas and mining industry to the sunny world of solar.

“It was a gradual change in mindset, wanting something different than the current path which, although lucrative at times, was not fulfilling. Around the same time as this mindset shift, the Alberta economy experienced a decline as oil sunk to under $40 a barrel and many heavy industries reduced their hiring or were laying off scores of people. This was the first or perhaps the clearest sign that a new energy economy was about to begin and like the folks who capitalized on other energy booms, we wanted to be at the forefront of this shift,” Yereniuk explains.

While the company has faced a handful of challenges, including skepticism toward solar power’s efficiency, Yereniuk and Kubiski have found success both on their home turf and across Western Canada. Kuby Energy’s solar panels can be spotted on the roofs of Edmonton businesses and homes, adorning the walls of Red Deer College, and in both Beaver Lake Cree Nation and Lubicon Cree First Nation.

In response to the ever-shifting political climate, Kuby remains focused on business development and growing renewable energy in Alberta.

“In the near term, we hope people will realize solar and wind are viable sources of energy that complement traditional generating means. Wanting to install solar panels doesn’t mean you hate the oil and gas industry – quite the opposite. In fact, we and most of our employees come from and have benefitted from the oil and gas industry. In the mid- to long-term, we hope regulations, codes, policies, corporations and governments adapt to a higher environmental standard that values the reduction, elimination or reversal of carbon emissions.”

Sharing Kuby’s passion for the budding renewables industry, Carbon Busters opened shop in 1992 and has been involved in greening projects across North America and Europe with an end goal of reducing carbon footprints and developing sustainable building practices. The company’s first project was a self-funding energy efficiency program for large building operators, cutting its client’s utility bill down by $26.7 million and reducing carbon dioxide emissions by 78 million kilograms all at a negative net cost.

The local business built the first zero carbon laneway house in Edmonton and is currently focused on the development of a sustainable community on the old airport lands.

While Carbon Busters is kept busy designing net zero homes, Mano stresses the importance of expanding the industry to keep up with sustainability goals.

“We need leaders to think strategically and for the long-term health of our planet. Edmonton is moving towards advanced building practices, but the capacity to build high performance and net zero energy buildings is largely restricted to small boutique builders,” Mano admits. “Carbon pricing reflecting social costs of air pollution is starting to shift the economic advantage towards high performance buildings.”

With a renewable energy industry rising in Edmonton’s own backyard, the importance of supporting the greening movement becomes evident if Alberta hopes to keep up with the energy industry’s progression. Times are changing and with them, whether willingly or by force, industry must as well. If there is anything Edmonton sustainable energy leaders have to tell the rest of the province, it’s this: Alberta energy is not dead. It just needs an update.