It could be called the ultimate Edmonton connection! After nearly a decade of planning and hard work, billions of dollars and tens of thousand of jobs, the Valley Line Southeast and the Valley Line West are about to be a major boost for Edmonton.

“Over the coming decades, Edmonton’s population is anticipated to double to 2 million people,” explains the enthusiastic Brad Smid, Director of Edmonton’s Valley Line LRT. “Simply building more roads in Edmonton won’t serve a growing population. Currently, approximately 25 per cent of trips in Edmonton are by active modes of transportation – walking, cycling, rolling and public transit. With Edmonton’s growth and expansion comes the need to expand the City’s mass transit network.

“Our transportation needs are outpacing our infrastructure capacity, and LRT provides a proven, high-quality, high-capacity, efficient and environmentally-friendly way to move people. Guided by The City Plan of Council’s strategic goals, LRT is the backbone of the transit network and critical to increasing mobility options, equity and access in the city.”

Smid points out that the four segments – the popular Capitol Line, the Metro line, the Valley Line Southeast and Valley Line West – will be an efficient, Edmonton connection.

Some of the Valley Line Southeast features will include: an elevated station with a 1,300-spot park and ride facility and a full transit centre located in the Wagner industrial area, the new Tawatinâ Bridge across North Saskatchewan River, a short tunnel from the north face of the River Valley through to the Quarters redevelopment and an an interchange point at Churchill Square to access the existing Metro and Capital LRT lines.

According to TransEd, one of the challenges of constructing the massive Southeast Line project was working within developed and busy neighbourhoods. Managing traffic and pedestrians during construction, while also trying hard to limit the direct impact to adjacent residents on a project of this scale, was a challenge.

Compared to Edmonton’s Capital Line, the Valley Line is a low floor LRT system, designed to integrate with its surrounding community. The LRT stops are closer together, which offers greater connectivity to the surrounding communities. The trains share the road right-of-way and travel at about the same speed as cars. At crossings there are no gates or bells so drivers and pedestrians must follow the traffic and pedestrian signals and only cross the tracks when the signals indicate it is safe to do so.

The Valley Line LRT and the existing Metro or Capital lines will operate completely independently.

Trans Ed also points out that some pedestrian crossings will require pedestrians to cross in two stages, the road and then the tracks, or visa versa. Pedestrians will need to ensure they obey the pedestrian crosswalk signal for the first stage and then stop and wait for a walk signal on the second stage. Another unique feature of the Southeast Line will be the introduction of heated LRT stop shelters – a first for LRTs in Edmonton.

The entire 27-kilometre Valley Line, once operational, will be a critical addition to Edmonton’s mass transit network. The Valley Line will more than double the current length of the existing LRT in the city (Capital Line and Metro Line are approximately 24 kilometres in length; however, both of these lines are currently being expanded as well).

As the Southeast Line nears completion, work is ongoing on the much-anticipated Valley Line West. It will be the second stage of the Valley Line, an urban-style 27 km line that will operate between Mill Woods in southeast Edmonton and Lewis Farms in west Edmonton.

“Valley Line will ultimately connect southeast Edmonton through downtown to the far reaches of west Edmonton. Valley Line is all about staying connected, with more frequent and more accessible stops that will allow Edmontonians to access all the communities along the line, not just the hot spots,” Smid says.

“During the construction phase, economists estimate that Valley Line West will create approximately 8,800 jobs in Alberta and $760 million in salaries,” he says. “Once Valley Line West is operational, it will increase mobility options for Edmontonians to access key destinations throughout Edmonton, including the West Edmonton Mall, Misericordia Community Hospital and all of the businesses, services and activities in Edmonton’s downtown core. Valley Line West will also connect to Valley Line Southeast, Capital Line and Metro Line at the Churchill Connector, providing Edmontonians with key connections to the rest of the city.”

Like the Southeast Line, the Valley Line West is being built through a number of mature neighbourhoods and constrained corridors between downtown and Lewis Farms. During construction, this inevitably presents challenges for residents, businesses and other stakeholders along the construction route.

Anticipating the Valley Line Southeast opening this fall, and looking at the massive in-progress work on the Valley Line West targeting 2027, it’s exciting that LRT is an investment in Edmonton’s future: the development of a modern, globally competitive city with a transportation system that meets the needs of a diverse, dynamic and growing population. 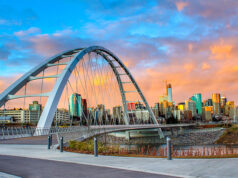 Edmonton Continues to be an Attractive Location for Head Offices