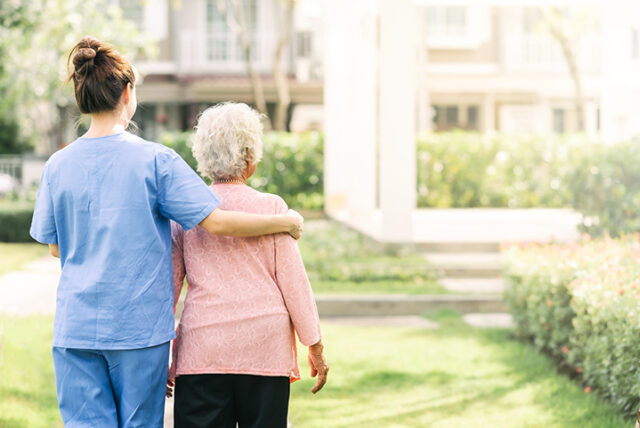 All too often, people spend their lives working towards retirement while neglecting the actual aging part of the equation. There’s no denying it, the longer people live, the more lifestyle needs change with age and that means appropriate living situations should be part of planning for the future. But according to industry professionals, over 80 per cent of Albertans continue to avoid leaving their homes. Those who remain too long in single-family homes with large yards, basements and stairs, may be risking their healthy futures through a fall or the drawbacks of isolation.

“Sadly, moving tends to be more of a crisis management situation because people continue to wait in denial until the 11th hour, avoiding the fact that it’s likely past time to transition,” says Greg Christenson, president at Christenson Developments. “That situation is more stressful and doesn’t offer the same length of time to make the best decision.”

In March of 2021, the Government of Alberta’s Annual Report: Seniors and Housing 2020-2021 indicated the province was home to approximately 670,000 seniors, 15 per cent of the total population. By 2035, that number is expected to surpass 1 million seniors, 19 per cent, or, one in five Albertans. Still, the inevitability of aging continues to be avoided while there’s a lack of awareness around the options available.

“People fight it tooth and nail, they go in [to institutional long-term care] and they decline right away, often passing away soon after,” says Dawn Harsch, president and CEO at ExquisiCare. “Those places can be unpleasant, they look, feel and smell like a hospital. A lot of people aren’t aware there are so many alternatives to that institutional care environment and I would encourage people to know what all of those options are.”

Harsch and Christenson suggest people research and plan for their future, transitioning sooner than later. Doing so leaves more options on the table and better chances of a higher quality of life for the long-term.

The current monthly cost to a resident in government-funded long-term care sits at $2,132 for the accommodation with the government picking up the remaining care expenses. Gaining in popularity, is designated supported living (DSL). Approved and subsidized through the provincial government, these residents receive publicly funded 24-7 on-site personal care and support services. Operated by either Alberta Health Services or contracted providers, DSL embeds long-term care within more attractive residential living rather than the institutional setting. “With DSL, the cost to build is less. Modern apartments are already equipped with accessible age-in-place design features for adaptability,” says Christenson.

For those who can afford it, in-house care by a private nursing service can be a good option but can cost upwards of $300,000 per year for 24/7 care as it requires multiple caregivers. Meanwhile, the average private-owned facility might cost residents an average $4,000 per month while taking some burden off the public system.

With his mind set on creating healthier and happier futures for Albertans as they age, Christenson has worked for over 30 years to create innovative active adult living housing. His company manages over 1,500 homes in 10 luxury retirement communities around Alberta.

“We believe in the residential choice over institutional models and our properties are designed to promote holistic healthy living in a preventative health and socially engaging lifestyle,” says Christenson. “Our active adults can age-in-place through retirement and beyond.”

Christenson Developments communities tend to follow the conventions of an urban village that supports healthy living and social interaction. “Our buildings have central dining rooms, movie, craft and party rooms, courtyards and generous two-story lobbies that lend a sense of arrival. We also have dementia-friendly wings built according to our provincial health care standards,” says Christenson. “While people might downsize to an active living adult condo, we offer facilities that are typically better than their single-family home for hosting family gatherings with guest suites available for visitors.”

For those beyond the active living stage needing more care, ExquisiCare offers an extended family-like setting in 10-bedroom residential estate homes. Residents are greeted by name and have a sense of belonging at a cost not much above that of the government-funded facility.

“Our homes look, feel and smell like a home,” says Harsch. “All our meals are home cooked. Just the smell of a roast in the oven, that olfactory response wakes our appetites. A lot of elders lose weight, becoming frail in an institutional or government funded long-term care facility. In contrast, when they come to us, we get them to gain back that healthy weight.”

ExquisiCare’s private care homes support age-in-place living from the assisted living stage through to long-term care and eventually the palliative care phase. “We are an alternative to institutional long-term care,” says Harsch. “People can move into an ExquisiCare home when they no longer feel comfortable or safe in their own home. They’re ready for 24/7 care and they take comfort in knowing they won’t have to move again. The average age of our residents is 93 and we have several centenarians with us.”

Each location in Harsch’s holistic service model retains the same long-term staff of 10-to-16 and is overseen by a nurse, or “elder guide” who looks after clinical medical needs and beyond.

“I designed this model to create spaces where people want to live, but also places where people enjoy coming to work. We have a real consistency in our care giving. Some of our elders are challenged in advocating for themselves. Our staff get to know them so well, they can anticipate their needs,” says Harsch.

The elder guide secures resources that enhance each elder’s life – hair care, massage therapy, entertainment and more, including a beer making system for one gentleman who loves his beer.

“We’ve always been committed to helping our elders find purpose and meaning. They might need help with their day-to-day living, but we value them and find ways to let them know they’re valued,” says Harsch.

There are also benefits to private models that keep couples together. Where most government-funded facilities base admission upon individual care needs, Christenson Developments and ExquisiCare welcome couples with differing needs. “It’s really sad when these people who’ve been married for 50 or 60 years feel like they’re ‘divorced’ because they have to live in two different facilities,” says Harsch.

Inevitably, one person in a couple will require more care. It’s common to see the healthier individual care for the other, negatively impacting the informal caregiver’s physical and mental health. Instead, models that accommodate couples aren’t just healthier for both individuals, they make good economic sense. “From the dollars and cents perspective it saves the Alberta Government billions of dollars to keep spouses together as well as close to their adult children,” says Christenson. “That integration of family and government services is something we’re very interested in and promoting.”

Harsch feels hopeful by increasing attention around the small home long term-care model while Christenson believes Albertans will see new home care models supported by the Alberta Government as soon as 2022. “People are increasingly understanding the merits of the residential and social model to avoid the need for long-term care,” says Christenson. “Builder-developers are not starting off with a picture of the hospital in their brains, people are looking at healthier alternatives.”

As the health and wellness benefits continue to be realized, the City of Edmonton and increasingly educated builders are working to be ready. “Much of this movement is led by progressive councils and mayors while the industry, including ourselves, and other organizations like the Chamber of Commerce, have long fought for it too,” says Christenson. “People want to see neighborhood development and revitalization, including mixed density and intergenerational neighbourhoods with a range of building forms and tenure. It’s taken some time, but I’m an optimist and I see that we’re on the cusp of great progress.”